Arson at the Ashmolean (Oxford Key Mysteries #3) by Lynn Morrison 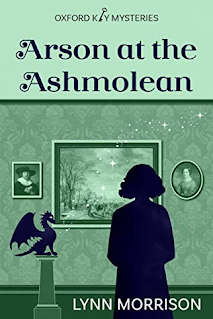 When the smoke clears, a man lies dead and a young woman looks to blame.

The fire in the Ashmolean’s archives reveals itself to be a cover-up for the real crime: dozens of valuables are missing from the shelves. Unfortunately, security guard Andrei Radu dies from smoke inhalation, elevating the crime to a homicide.

DI Robinson, Oxford’s leading detective, is determined to see the guilty prosecuted. A witness puts Kate’s young assistant Francie at the scene. She claims to be innocent but DI Robinson isn’t convinced.

Nat and her friends know the likely perpetrator is the person behind the problems with the magic. Can they save Francie from going down for a crime she didn’t commit?   (Summary via Goodreads)

Books in the Oxford Key Mystery series by Lynn Morrison should come with a warning label !!  There should be a warning that you will not expect the books to end with such a dramatic cliff hanger !!  I thought after reading Burglary at Barnard with the way Morrison left the readers with such a big open ending,  I would have been prepared when I started reading Arson at the Ashmolean.....but that wasn't the case at all !!

When readers got to the end of reading Burglary at Barnard they learn that the Ashmolean museum is on fire.... but first I must back track.....

In the Oxford Key Mystery series readers are hanging out with Natalie, Kate, Mathilde, Harry, Edward, H the wyvern, Bartie and Nat's grandfather.  Natalie, Kate and Mathilde are prefects and they work at the colleges inside Oxford and oversee the magic within.  Harry  is the assistant to the Principal at St. Margaret College and she became close to Nat when Nat started as Head of Ceremonies for Oxford and Edward is Natalie's boyfriend and they are both able to see and experience the magic with Nat's help.  Bartie and Nat's grandfather are Externals and they are among a large group that oversee and protect the magic.  However we know from the first two books in this series that someone is messing with the magic and shifting the boundaries of the force field.

Okay that provides you with an insight into this series ...... now Arson at the Ashmolean, the third book in this series, we pick up right where Morrison left off in the second book with the group learning about the fire at the museum.  Luckily the fire is contained and nothing valuable is lost however Andrei, the security guard, is found dead in the storage area where the fire originated.

Nat and her group are still trying to figure out what is wrong with the magical boundaries and who is too blame for this but when Kate's assistant is arrested for the fire and murder of Andrei, they decide to investigate this knowing that she is innocent.

Nat always seems to have a lot on her plate and in this book, that is still the case.  Not only is she working on her next ceremonial event, the magical problems, now the fire and murder but she has to leave the flat she has been living in since arriving at her new job.  She was provided the flat for 6 months and that timeframe is coming to an end.  Readers will enjoy the flat hunting she and Mathilde go on and the result of her living problem.

I have said it before and I will say it again..... If you are a Harry Potter fan, the Oxford Key Mystery series is a must for you to read !!  You will thoroughly LOVE the people, magic and the setting !!  There are times that you will crack up laughing while you read about Nat and the trouble H gets her in and you will curse yourself at turning the pages so slowly and wish you had a spell of magic that could turn them for you.

I highly recommend reading this series and will take this time to warn readers...... especially with Arson at the Ashmolean.....the ending will shock you .... because it will leave you turning the page to read more and there will not be another page or chapter....just the description for the next book in the series.  If that isn't a sure way to make you look forward to the next book, I don't know what else an author can do.  You will have to get the next book to answer the opened questions you will have..... BRILLIANT !!!