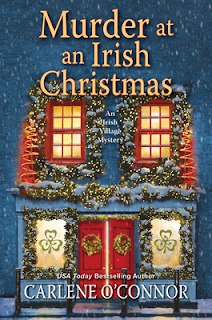 The O'Sullivan clan of County Cork, Ireland, are back to investigate another case of murder--this time at Christmas!

This December in Kilbane, if you're planning to warm up with a cuppa tea at Naomi's Bistro, you may have a bit of a wait--the entire O'Sullivan brood has gone off to West Cork to spend the holidays with brother James's fiance Elise's family, including her grandfather, the famous orchestral conductor Enda Elliot. Siobhan is so happy for James and Elise but also quietly disappointed that she must put her own wedding to fellow garda Macdara Flannery on hold. Mac will have to join them later, so he can spend part of the holidays with his mam.

When the O'Sullivans learn everyone will choose a name from a hat to buy a music-related Christmas gift for someone else at the gathering, it seems like their greatest concern--until the cantankerous conductor is discovered crushed under a ninety-pound harp in a local concert hall.

With the extended family--including Enda's much-younger new wife Leah, a virtuoso violinist--suspected in his murder, it's up to Siobhan to ensure the guilty party faces the music. But as a snowstorm strands both families in a lavish farmhouse on a cliff, Siobhan had better pick up the tempo--before the killer orchestrates another untimely demise...   (Summary via Goodreads)

In Murder at an Irish Christmas by Carlene O'Connor, main character Siobhan O'Sullivan just wants to enjoy the holiday with her brothers and sisters and get to know her brother James' fiance and her family.  The last thing she wants to do is get herself in the middle of a murder investigation.  Unfortunately that is exactly what happens and she cannot help but drag her fiance Detective Sergeant Macdara Flannery into it as well.

Siobhan and her siblings are spending Christmas in West Cork with James' fiance Elise and her family as well as attending a concert orchestrated by Elise's famous grandfather, Enda Elliot.  They arrive in town early so that they can enjoy the holiday and get to know everyone....except they won't be able to met Elise's grandfather because he is found at the mill, the place where the concert is to be held, dead on the floor with a harp on top of him.  Siobhan tries really hard to stay out of the investigation but when she feels that the Garda in charge is looking at the wrong person for the crime, she knows that she has to step in.  And her fiance Detective Sergeant Flannery comes to town with his mother in tow and gets assigned the case.

Siobhan and Dara find they have a tough job ahead of them when they realize everyone has secrets and no one is telling the truth.  Luckily Siobhan has an idea of who is behind Enda's death but proving that will be difficult to do.

Readers will be engrossed in this sixth book in the Irish Village Mystery series immediately.  You cannot help but fall in love with the characters and the setting.  O'Connor will have readers settling back in their comfy spot with their favorite drink and snack and putting the "Do Not Disturb" sign in front of them....they will not want to be interrupted once they get going in the story.