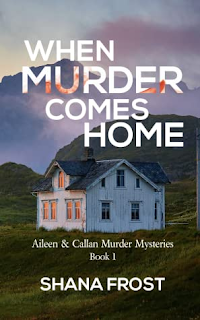 An adventure she’d asked for, being a murder suspect? Not really.Introverted yet brilliant (former) accountant Aileen Mackinnon ditched her risk-less life in the city for the village of Loch Fuar, nestled in the picturesque Scottish Highlands. Now she’s the co-owner of her Gran’s inn, Dachaigh, and an amateur innkeeper to ten new guests. But when one of her guests doesn’t turn up for breakfast and the other dangles over the window sill, Aileen finds herself in deep waters, especially with the handsome local detective.One man show, Detective Inspector Callan Cameron couldn’t be happier— finally a murder if not two! The only issue- he’s forced to join forces with the new innkeeper in town. What could be more horrible than having a partner? A partner Callan loves to argue with? A partner that gels with his detection style seamlessly?Between bloody murders and stolen rings, the tension is high, so is the heat. They might not always see eye to eye, but can they agree: whodunnit?When Murder Comes Home is the first novel in the Aileen & Callan Murder Mysteries based in the fictional town of Loch Fuar in the Scottish Highlands. This 55,000 word novel will make you bite your nails and laugh alongside lovable characters. Ready to enjoy some gore and lots of suspenseful fun? Download this book now!  (Summary via Goodreads)

When Murder Comes Home by Shana Frost will have readers conflicted.  Readers are going to fall in love with Aileen Mackinnon and her desire to leave a demanding job in a big city to move to the village of Loch Faur to run her grandmother's inn but they are going to hate that after she spends time and money renovating it and reopening it murder also checks into the inn on her re-opening weekend.

Aileen's grandmother moved to a nursing home and can no longer run the inn so Aileen decides to leave her job and home and move into the inn and run it but she has to fire the current innkeeper and repair a lot of things in the inn before she can open it up to guests.  After the town along with Detective Inspector Callan Cameron, help Aileen fix it up, she welcomes 10 guests to the inn for the re-opening weekend.

While Aileen is getting use to running an inn and trying to satisfy all of the guests needs, she never expected to have one of the guests murdered .... and it looks like one of the other guests is the murderer !!!  Aileen joins forces with Callan to try to solve the murder but they have no idea why someone would murder another stranger.  It doesn't seem that any of the guests know each other and according to the security cameras no one entered the inn on the night of the murder......

When Aileen and Callan go to the nursing home to visit her grandmother, they learn that her grandmother's engagement ring which Aileen thought wasn't real was indeed real diamonds and it is no longer in the safe at the inn.  How could someone have gotten the keys that Aileen always has on her and gotten in the safe..... and how did they even know about the ring in the first place ??

Aileen and Callan seem to have more questions than answers and when someone else in the inn is murdered, they must put their heads together and solve this case......

Frost has a way of drawing the reader into the story and her vivid descriptions will have the readers imagination on overdrive.  Readers cannot help but love everything in this story and will want to make reservations at the inn, even chancing thier own lives.  And there is a secret about Callan that she hints at at the end of the book that will insure readers will be looking for the next book to see what unfolds......