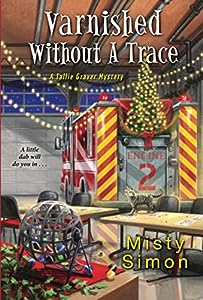 Her number is up . . .
This Christmas, Tallie Graver would like to take a break from running her cleaning business to be with her boyfriend, Max, and enjoy their first holiday together--alone. Instead, she's stuck keeping her mother and grandmother from duking it out during the town's annual Christmas Eve bingo game. As for festive spirit, she'll have to settle for her mean-spirited Aunt Ronda, whose mouth could use some soap.The night only gets worse after Tallie discovers Ronda's body. It seems someone cleaned her clock with a can of varnish. While all the evidence points to Ronda's husband, Tallie doesn't believe her beloved Uncle Hoagie could do such a dirty deed. Of course, his sudden disappearance doesn't help his case. If Tallie hopes to clear his name, she'll need to dig up some dirt to locate the real killer. Otherwise, someone else could get rubbed out . . .Praise for Cremains of the Day"Simon kicks off a new series that combines a bit of humor and romance with a heroine who knows no boundaries while searching for the truth that will keep her out of jail."--Kirkus Reviews "An amusing new series with an engaging, spirited sleuth."
--Library Journal"You'll be cheering as the clues pile up in this creative cozy mystery."--New York Times bestselling author Lynn Cahoon  (Summary via Goodreads)
You would think that by reading the first four books in the Tallie Graver Mystery series by Misty Simon, readers would be prepared for what unfolds in the fifth book, Varnished Without a Trace.  Boy are we wrong !!!
Simon throws ALL the punches she can in this book and main character Tallie is right there to catch them all !!
In Varnished Without a Trace readers will think that they are going to have a mellow story seeing as it starts with Tallie, Max, Tallie's mother and grandmother attending bingo at the firehouse on Christmas Eve.  I mean it's Christmas time, a time where everyone is in good spirits and visiting with family and eating lots of yummy food.  However for Tallie her uncle Sherman who is the Fire Chief is dealing with a firebug and wants him or her caught before the fires esculate and someone gets hurt or dies so he asks Tallie to look over the files to see if fresh eyes will catch something.  Also as everyone is leaving the firehouse after bingo, her aunt Ronda is found dead after being hit in the head with a can of varnish.  Aunt Ronda is married to Uncle Hoagie and they own the hardware store in town which is where Tallie and Max have been spending a lot of time there as they are renovation their apartment above the family funeral home.
All Tallie wants to do is spend this first Christmas season with Max and her family and relax and enjoy it.  But when Uncle Sherman and Police Chief Burton ask her for help and she sees how tired they both look, her heart goes out to them.
Vanished Without a Trace has so much going on with the firebug and a murder......and Tallie finds out that certain family members aren't who they say they are and that sends her down a dark path.  But when the firebug takes things to the next level and her favorite employee, Letty, is trapped in the burning house, Tallie sees red and I'm not talking about fire engine red !!
Everyone knows that Tallie will go out on a limb to save her town and everyone in it.  She still feels like she has to prove herself from when she turned her back on everyone when she was married to Waldo and she was a snob.  Sadly she can't see that everyone has forgiven her and have grown to depend on her to help solve any crime that threatens their town.
Readers will be totally on the edge of their seat reading this latest installment in this series.  There is a lot to handle but with Tallie on it, we know that everything will be okay in the end....we just have to get through the nail biting and breath holding stage and let Tallie take us to the finish line .... in her own time and way.
Review by Missi M.
Posted by Cozy Mystery Book Reviews at 08:06