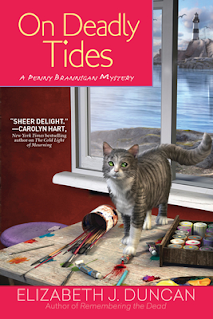 With a picturesque black and white lighthouse, pebble beaches and stunning views of sea and mountains, the island of Anglesey off the coast of North Wales is the perfect place for an idyllic mid-summer painting holiday.
And watercolour artist, businesswoman, and amateur sleuth Penny Brannigan is enjoying the retreat enormously - until she discovers the body of a New Zealand journalist on a secluded beach just as the tide is going out, threatening to take the body with it.
The post mortem reveals the victim died from injuries "consistent with a fall from a great height," and the death is ruled accidental. But Penny thinks there's more to the story. Curious how the victim came to such an untimely end at this most inhospitable spot, she uncovers a link to a mysterious disappearance several years earlier.
And as her holiday romance with a wildlife photographer turns to love, she learns some truths about herself, too, that surprise her.
As the winds of change blow through Penny's own life, she sets sail on a friendly tide for a future she never dreamed possible, in a beautiful place she never imagined.   (Summary via Goodreads)

On Deadly Tides is the eleventh book in the Penny Brannigan mystery series by Elizabeth J. Duncan and the first book in the series that I have had the pleasure of reading.....and boy was it an awesome read !! On Deadly Tides felt like it could have been a stand alone book or the first in a new series.

Main character Penny Brannigan and her friend Alwynne are on a girl's get away weekend to a motel for a painting retreat with actor turned painter, Bill Ward.  On the friday evening there is a welcoming party in the bar of the hotel and Alwynne goes to bed early so Penny is on her own.  Penny meets two people Colin Campbell and Jessica Graham both there seperately.  Colin is a wildlife photographer in town to take photos of local wildlife and Jessica is in town to write about local interests as well as look into an old case of a missing person.  The three of them share a table in the bar and get know each other.

After parting ways Penny doesn't think much of Jessica until the next morning while her and Alwynne are at the local lighthouse setting up to paint it and its surroundings when Penny looks down the cliff at the beach below and sees Jessica's lifeless body.   After it is investigated it is ruled that Jessica's death was an accident.  Only Penny can't help thinking there is more to it especially seeing as the backpack that Jessica had with her friday night was no where to be found.  It wasn't at the scene or in her hotel room.

When Jessica's mother, Louise, comes to claim her body her and Penny hit it off and soon agree that there is more to Jessica's "accident".  Unfortunately the police cannot just go on what someone thinks or feels and do not take things seriously until Louise is poisoned one night at the hotel.

Now that the police are looking into Jessica's death Penny can concentrate on her growing feelings for Colin.  The two have spent some time together and have been keeping in touch.  But when Colin gets on board with his curiousity on Jessica's death as well, Penny will allow him to assist her in investigating.....

On Deadly Tides will capture readers attention immediately and they will want to solve Jessica's murder also.  They will also be drawn to the storyline behind the missing person case from seven years ago.  And who cannot be curious when a new relationship is blossoming..... Duncan will draw the reader in and as you get lost in the story you will be powerless to shut the book....not that you will want to.  It is always a treat when you are reading a cozy mystery to have a love story intertwined in the story and Duncan has aced that as well.  Whether you are a long time fan and have read the previous books or you are reading On Deadly Tides and this is the first book of this series that you have read, you will be a devoted fan !!