Bert and Norah: The Missing by Bernard Burgess 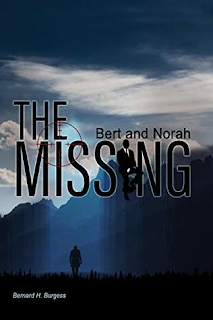 Set in the Rocky Mountain and Great Plains state of Wyoming, the second book in the Bert and Norah series is a tantalizingly multifaceted story of investigation into the missing child of a high level figure. Things are seldom as they seem in a mystery made more complex by an array of possible suspects. The B & N investigation team must deal with numerous complications as they become the secret, behind-the-scenes investigation of the investigators, at least one of whom is suspected in the crime. Norah must tend to her gravely ill mother during the early part of the case, leaving Bert to carry the load while seeking her inputs during nightly talks. On the periphery, a mysterious man seems to shadow and watch Bert’s every move. He appears to be part of a conspiracy to stop the B & N investigation at any cost. Coywolf companion animal, Missy, helps keep Bert grounded and Norah’s spirit high, as they walk, think, and eat pie around some of Wyoming’s scenic beauty. In the meantime, a young man turns up missing, and another theory is born. While this team is trying to figure out “who-dun-it”, the ultimate goal is to return those who are missing to their families. Will Norah’s gift and Missy’s nose steer them in the right direction, before the missing are sacrificed at the altar of high level greed.    (Summary via Goodreads)

GOOSEBUMPS !!!!  That is what you will get when you are at the end of Bert and Norah: The Missing by Bernard Burgess.  The Missing is the second book in the Bert and Norah Mystery series and if you read the first one, The Nickel Dime Murders you most likely closed the book after having your mind blown !!

Bert and Norah are a husband and wife investigative team and have their own business, B & N Investigations, and in The Missing they will get drawn into a case that may be too much for them to handle.  While Norah is away sitting with her dying mother, Bert gets a call to investigate a missing teen.  When he has his initial meeting to discuss the case, he finds out that the missing teen is the 16 year old daughter of Wyoming Governor Samuel Patterson.  Knowing that they have to trend carefully not knowing why she was taken, Bert and the Governor begin meeting secretly to discuss the case.  Meanwhile Norah, who can communicate with spirits and feel things spiritually communicates with the spirit world while with her mother.  When Norah's mother takes a miraciously turn and is sent home, Norah in able to join Bert on the case.

When they learn that the son of the Governor's best friend is also missing and someone tries to run Bert off the road, Norah urges him to be very careful.  She can see in the spirit world that he could be in danger or heading right into it.

Burgess is a word genuis and knows how to tell a story.  He knows how to keep the readers attention throughout the book and provide us with an explosive ending that will have us looking for the next book in this series.  With each book we learn more about Bert and Norah's relationship and their tie to each other.  We also see that the cases become more involved but it's nothing that they cannot handle together and their spirit connection gets stronger and stronger !!