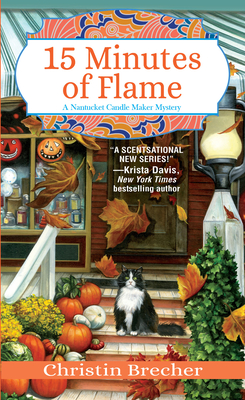 When Stella's friend inherits a creaky, abandoned home in Nantucket, she knows it's the perfect setting for the town's annual Halloween fundraiser. A deserted, boarded-up building on the property--once used as a candle-making shop--adds to the creepy ambiance. But as Stella explores the shack's dilapidated walls, she discovers a terrible secret: the skeleton of a Quaker woman, wrapped in blood-soaked clothing and hidden deep within a stone hearth . . .

While police investigate, Stella wastes no time asking for help from friends with long ties to Nantucket's intricate history. The key to the murder may lie within a scorching 18th century love triangle that pit two best friends against one another over a dubious man. But before the case is solved, another life will be claimed--leaving Stella to wonder who in Nantucket is friend, and who is foe . . .

Praise for Murder's No Votive Confidence

"A charming mystery with believable, likeable characters. Check it out."
--Suspense Magazine    (Summary via Goodreads)
The Nantucket Candle Maker Mystery series by Christin Brecher is such a fun read !!  The main character, Stella Wright, is a candle maker and has such a strong sense of smell that it helps her when she gets into tough places.
15 Minutes of Flame, the third book in this series, really tests Stella when she gets permission to use a friend's empty house to use as a haunted house for the Girl Scouts to raise money and in a boarded up shack in the back she finds a skeleton hidden in the wall...... oh the smells that are there !!
When Stella goes to research the skeleton she finds out that one of the ladies that is in her candle making class, Agnes, is a distant relative to the skeleton, Patience Cooper.  After further digging they find out that Patience was murdered and her best friend Nancy committed suicide after some cash went missing and Patience and her husband disappeared.  Nancy committed suicide by jumping down into a well that her family has left alone and consider it her burial site.  In order to solve Patience's murder and be sure that Nancy did indeed jump down into the well, local police, Andy, invites 2 forensic anthropologists to come to Nantucket to go down the well.  And the owner of the property where the well is located calls in a filmmaker who specializes in this kind of story......
Stella will do anything to solve a murder.....even move into the abandoned house where the first skeleton was found.  Even though she is a candle maker and has to put that first and foremost, she cannot help but want to make her town as safe as possible.
Readers will love this unique way that Stella is able to use her craft for more than making tantalizing smelling candles....and her town and friends don't hurt the appeal !!!  I highly recommend getting lost in this series and maybe light your favorite candle while you get lost in Nantucket with Stella......
Review by Missi M.
Posted by Cozy Mystery Book Reviews at 09:50