Death of a Wolfman ( Lily Gayle Lambert, #1) by Susan Boles

The first book in the Lily Gayle Lambert Mystery series. Quicker than she can stitch together the threads of a genealogy project she's just signed on to research, Lily Gayle Lambert finds herself embroiled in investigating the murder of a stranger who suffers from 'wolfman syndrome’. And, when a member of a prominent family turns up dead soon after the 'wolfman', Lily Gayle must find the link between the two and solve the mystery before she becomes the next target. Escaping from a trailer in the woods owned by two good ole boys and a confrontation with the eldest son of the town's wealthiest family have Lily Gayle hot on the trail of the killer…much to the consternation of her cousin. Who just happens to be the County Sheriff. With the help of her lifelong best friend, Dixie, and town busybody, Miss Edna, she pieces together the clues leading to a conclusion that shocks the entire town.  (Summary Goodreads) 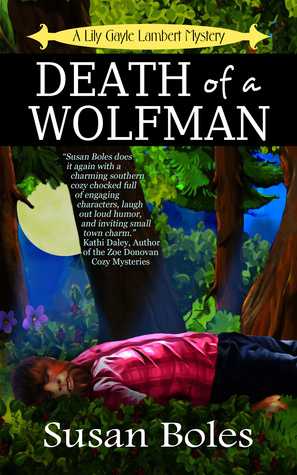 Lily Gayle lives in a small town where everyone knows everyone and everything about each other.  That is except for the Mitchell family.  The Mitchell family is the oldest family in town going back hundreds of years.
Lily Gayle is asked to do a genealogy report of the family but LizBeth Mitchell.  Unfortunately before she gets started on her research a dead body is found.

Having dinner with her cousin who happens to be the County Sheriff, he gets the call.  Thinking it is nothing he allows her to ride with him.  That turns out to be a bad decision because once Lily Gayle sees the body, she takes it upon herself to start investigating on her own.

There is so much to like about Death of a Wolfman....the small town feeling, the friendships, the relationship between Lily Gayle and Ben.

As this is the first book in the series, I plan on visiting this little town as often as Susan Boles will allow.