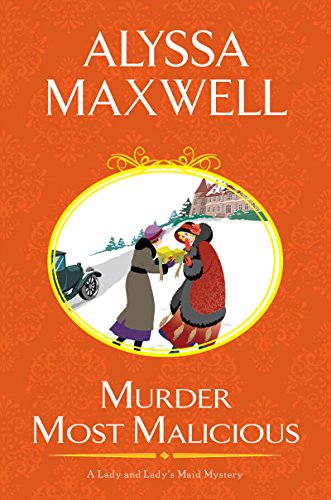 In post–World War I England, Lady Phoebe Renshaw and her lady's maid, Eva Huntford, step outside of their social roles and put their lives at risk to apprehend a vicious killer. . .

December 1918: As a difficult year draws to a close, there is much to celebrate for nineteen-year-old Phoebe Renshaw and her three siblings at their beloved family estate of Foxwood Hall. The dreadful war is finally over; eldest daughter Julia's engagement to their houseguest, the Marquis of Allerton, appears imminent; and all have gathered to enjoy peace on earth, good will toward men.

But the peace of Foxwood Hall is shattered on the morning of Boxing Day, when the Marquis goes missing. Not entirely missing, however, as macabre evidence of foul play turns up in gift boxes given to lady's maid Eva Huntford and a handful of others. Having overheard her sister and the Marquis in a heated exchange the night before, Lady Phoebe takes a personal interest in solving the mystery.

As the local constable suspects a footman at Foxwood Hall, Phoebe and Eva follow the clues to a different conclusion. But both young women will need to think outside the box to wrap up this case--before a cornered killer lashes out with ill will toward them. (Summary via Amazon)


It's amazing how much work authors put into a book, a story.  As the reader we never realize it while we are reading it.  We just pick up the book and read it. We just read and enjoy the story.

I thoroughly enjoy all of Alyssa Maxwell's historical mystery books.  So much thought and research is put in them that you actually learn things while you read.

In Murder Most Malicious, Maxwell's first book in her A Lady and Lady's Maid mystery series, I felt like I was right there along side Phoebe and Eva as they gathered clues as to the whereabouts of the Marquis of Allerton, Lord Henry.

Lord Henry and Lady Julia, the oldest granddaughter of the Earl of Wroxly, are overheard arguing on Christmas night by Phoebe and a few servants.  The next morning Lord Henry is no where to be found.  Is Lady Julia to blame for his disappearance ?

When some of the Christmas boxes are opened the next day, Boxing Day, some of the receivers are "gifted" with something of Lord Henry's causing the police to be summoned.

While Constable Brannock and Inspector Perkins search the estate property of Foxwood Hall, Phoebe and Eva do their own investigating to prove the innocence of employed Footman George Vernon.

Who will solve the case first and at what cost ?