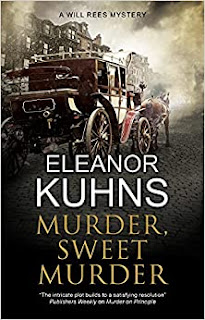 Will Rees accompanies his wife to Boston to help clear her estranged father's name in this gripping mystery set in the early nineteenth century.January, 1801. When Lydia's estranged father is accused of murder, Will Rees escorts her to Boston to uncover the truth. Marcus Farrell is believed to have murdered one of his workers, a boy from Jamaica where he owns a plantation. Marcus swears he's innocent. However, a scandal has been aroused by his refusal to answer questions and accusations he bribed officials.As Will and Lydia investigate, Marcus's brother, Julian, is shot and killed. This time, all fingers point towards James Morris, Lydia's brother. Is someone targeting the family? Were the family quarreling over the family businesses and someone lashed out? What's Marcus hiding and why won't he accept help?With the Farrell family falling apart and their reputation in tatters, Will and Lydia must solve the murders soon. But will they succeed before the murderer strikes again?  (Summary via Goodreads)

Readers of the Will Rees Mystery series by Eleanor Kuhns are going to go crazy, in a good way, when they start reading the eleventh book, Murder, Sweet Murder......Rees and his wife Lydia along with two of their children are heading to Boston to visit Lydia's family.

In Murder, Sweet Murder Lydia, who left home many years ago when her father had tried to marry her off to a gentlemen that she did not love, is returning after receiving a letter from her younger sister asking for help.  It seems that their father Marcus was accused of murder and Cordelia, Cordy, knows that Will and Lydia have helped solve crimes in their hometown in Maine so they are the obvious choice to clear Marcus's name.  Unfortunately when they arrive at Lydia's old home, they are not as welcomed as they had hoped.  First no one other than Cordy wants an investigation, it seems the case has somehow been swept under the rug, and second the family is not so warm to accepting Will into the family.  When Lydia left she didn't keep in touch with anyone other than Cordy so they are not aware of Will as her husband and of her children.

Will and Lydia are not deterred and begin their investigation into the young man's death.  It is known that he is from Jamaica, a plantation that Marcus owns, but not much more is known. He was killed in the middle of the night outside a tavern that was closed, no witnesses that they are aware of and not much to go on...so Will decides to start at the place of death and go from there......

Every time that they think they have a clue or a fact to the murder, something happens that changes their minds.  Once they start investigating they learn of more people that could possibly have committed the murder and when they find out that the person killed isn't who everyone thinks, they are lead down another disturbing road.  And when someone else is murdered in exactly the same way as the first person, Will and Lydia are more determined to find the killer !!

Readers will be drawn into the story immediately !!  Readers will love that Will and Lydia are traveling to Boston allowing us to get to know Lydia's family and the secrets that have kept her away for all those years.  There will be members of the family you will fall in love with instantly and there will be some you will hate as soon as you meet them....but you will enjoy the time that you spend in Boston and will be just as glad as Will is when they leave.