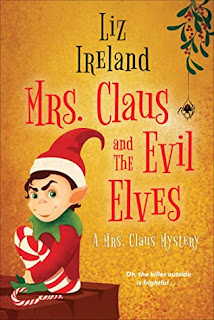 April Claus is getting an early gift for her second Christmas in Santaland. Her dear friend, Claire, is visiting from Oregon, and April hopes to show off her adoptive country at its cozy, glittering best. But when the annual ice sculpture contest is derailed by a kamikaze drone-deer, it’s just the first in a series of un-festive events…

Drone-deer, created by inventor elf Blinky Brightlow, are none too popular with the genuine, flesh-and-hoof kind, who are currently on strike. With no reindeer games to keep them in shape, Nick worries they may get too chunky to pull his sleigh come Christmas. Now Blinky is missing, his girlfriend, Juniper, is under suspicion, and between rogue reindeer and conniving elves, all of Santaland seems to have gone sugarplum-crazy. Add a dash of murder to the mix, and suddenly April is battling not just to clear Juniper’s name, but to save herself from being put on ice—permanently… (Summary via Goodreads)

I did not want it to end....I loved hanging out with April Claus in Santaland in the third book in the Mrs. Claus Mystery series by Liz Ireland....and you won't want to either !!!

In Mrs. Claus and the Evil Elves April's best friend from her hometown of Cloudberry Bay, Oregon, Claire is visiting April and her husband Nick for the Christmas holiday and Claire cannot believe her eyes and ears !!  She is visiting SANTA CLAUS and MRS. CLAUS and Mrs. Claus is her best friend !!!  Hard to wrap your mind around that.

Unfortunately while April wants everything to go smoothly for Claire's visit, it is everything but smooth.  The reindeer are on strike and ....wait, let me say that again.....The reindeer are on strike and with Christmas right around the corner, this could be a huge problem come Christmas Eve.  Also another of April's good friends, Juniper Greenleaf, who is an elf claims her new boyfriend, Blinky, is missing when he doesn't show up to a concert they are playing.  Blinky insisted that he would be there and when he doesn't show, they go to his place of business, Brightlow Brothers Enterprises.  Brightlow Brothers Enterprises is a electronics business that he runs with his brother Dabbs.  But Dabbs insists that Blinky is fine and is off sight in one of his creative moods.

Because Juniper insists that something is wrong April decides to try to find out what is going on.....unfortunately before they can locate Blinky, Virgil, an elf working for the brothers is found murdered in his house and the murder weapon belongs to Juniper.  So while Juniper is arrested and held in the constabulary and Constable Crinkles is focused on Juniper as the killer, April calls her friend private investigator Jake Frost to assist her in looking for the real murderer !!

Even though there is a missing elf, a murdered elf, and an elf arrested, you will still love Santaland and everything else there.  No place is perfect but if you have to have murder and unpleasant things, this is where you want to be.....a dessert buffet party, snowmen that talk, elves everywhere in full on elf-wear, streets like Wonderland Lane and Wishful Lane to businesses like We Three Bean coffeehouse and Tinkertown Arena and lastly elves named Butterbean, Velvet and Nippy...plus all the reindeer.

Readers will fall in love with this story and the previous two books in this magical series.  You will get lost in the story and may even find yourself believing in Santa Claus ....or at least wishing for him.  I cannot stress it enough to grab your copy and head to Castle Kringle and Santaland......