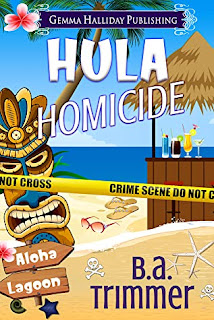 Kristy Piper finally achieved her lifelong dream of moving to paradise when she took a job in Hawaii as the Aloha Lagoon resort wedding planner on the gorgeous island of Kauai. Sun, surf, sandy beaches, and glowing brides...what could possibly go wrong?Turns out, everything.What starts out as a dream destination wedding, with a happy couple and their wedding party enjoying all that Aloha Lagoon has to offer, turns into a nightmare when one of the groomsmen is found dead just days before the ceremony. What's worse, Kristy's hot new photographer, Jake Hunter, was found next to the victim, along with the murder weapon, a souvenir tiki statue.While Kristy is convinced Jake had nothing to do with the killing, the police are not as sure. Suddenly it's up to Kristy to clear the heartthrob's name and figure out which of the wedding party had it in for the dead guest. Is it the groomsman with a past? The twin bridesmaids with designs on deception? Or the anonymous thief who stole the bride's wealthy aunt's jewelry just before the murder? With the help of her bold middle-aged office manager Dorothy and her beautiful best friend Leilani, Kristy attempts to wade through the wedding party of suspects, all with complicated histories with the dead man. Can they find the real killer before the police close in on an innocent man...or will they die trying?  (Summary via Goodreads)

Deadly Bubbles in the Wine (book #4) by Mary Jo Burke

Death of the Big Kahuna (book #6) by Catherine Bruns

Death of the Kona Man (book #9) by Catherine Bruns

Death Under the Sea (book #16) by Rosalie Spielman

Death on a Cliff  (book #18) by Rosalie Spielman

I know I say it every time I read a book in the Aloha Lagoon Mystery series published by Gemma Halliday Pulishing but it bears repeating....I LOVE this series and anytime I can open one of these books and escape to the coast of Kauai in Hawaii and hang out at the Aloha Lagoon Resort I am going to do it !!!  And what fun is it going to be with this NINETEENTH book in the series.....Hula Homicide by a new author to this series B.A. Trimmer !!!

In Hula Homicide we are introduced to Kristy Piper who has been living in Kauai for about six months and has the awesome job of wedding planner for the Aloha Lagoon Resort.  She works with Dorothy who handles everything in the office and Leilani who happens to be her best friend since coming to Kauai.  They are gearing up for a week-long wedding event.  The ten members of the wedding party along with the bride's aunt are on the island to celebrate and enjoy the area.  Carly and Justin who met in college are there with friends from college who are all part of the wedding party.  Kristy has also just hired Jake, a friend of Leilani's, to be the photographer.

The first thing to go wrong is a very expensive necklace of Aunt Audrey's is stolen and Carly is suppose to wear it during the wedding.  Then when the party is suppose to meet to go on a scheduled outing Kristy goes looking for one of the groomsmen only to find him dead in a conference room and Jake unconscious.  Things get worse when Detective Ray has Jake in his sights as the murderer.....but Kristy knows that Jake didn't do it and decides to find out who the murderer is to save her photographer as well as prevent the bride and groom from having their wedding.

Kristy is a very determined woman and wants nothing more than to solve the murder, prove Jake's innocence, get the bride and groom down the aisle to say "I do" and then watch the sunset with Jake.  Unfortunately a lot is going to happen that might prevent all that from happening.  The wedding party has a lot of old drama and secrets that resurface during this week-long event and Kristy has more than she can handle.

Readers will LOVE this new book in this series and hopefully you are already a fan of the Aloha Lagoon Mystery series.  If not, I highly recommend getting on board with all these amazing books and authors !!!