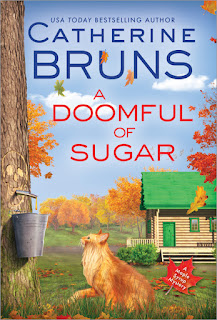 There's nothing sweet about murder…

Leila Khoury has always believed that everyone loved her father as much as they loved his artisanal maple syrup. But when he's killed, and she returns to Sugar Ridge, Vermont to take over his business, she starts to realize how much of his life she's left untapped.

With her brother under suspicion, her mother just barely holding it together, and police not producing any leads, Leila will have to investigate herself if she wants answers about her father's sticky end. But the more she learns, the more she worries that there won't be a sappy ending to the story.

A cozy mystery perfect for fans of Joanne Fluke, this edition includes 5 delicious maple recipes for mystery readers with a sweet tooth!  (Summary via Goodreads)

A Doomful of Sugar is the first book in a new series by Catherine Bruns and readers will fall in love instantly !!

The Maple Syrup Mystery series is set in Sugar Ridge Vermont on a maple syrup farm called Sappy Endings.  It is a family owned business and when the owner is found murdered, the farm is left to his daughter Leila to run for at least a year before she decides its future.

In A Doomful of Sugar Leila returns to Vermont from her teaching job in Florida to be there for her mother and younger brother, Simon, and to attend her father's funeral.  Unfortunately her trip is extended indefinitely when she learns that her father left her Sappy Endings and insists that she runs it for one year before deciding whether to keep it or sell it.  She also decides that while she is back, she will find out who killed her father and why.

While trying to learn the ropes of the farm, she is looking into her father's death and she is very suspicious of everyone....including her two employees.  Jessica has been with the farm for years and runs the cafe and oversees the gift shop and Noah, who Leila is just meeting, has been Victor's right hand man for a while.  While she is suspicious of everyone, they do not make it easy as they both seem to have secrets.  Unfortunately Leila soon learns that a lot of people that she thought she knew are not who she thinks they are ....

But when another death occurs and Simon is arrested for their father's murder, the clock is ticking for Leila to do something.....but what ??  It is hard to know who to trust and who to be leary of.

Readers will want more of this series and Bruns has set the stage beautifully for future books.  I cannot wait to see where she takes the stories and what will happen next.......