Peril at the Party (Missteps of Murder #1) by Aubrey Elle 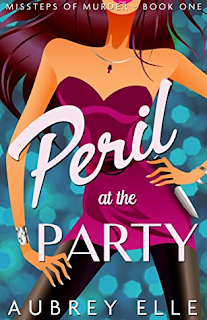 Once grand and gorgeous, the castle-like Baycourt Hall is now on the brink of closing. If business stays steady for the party venue, newly hired event manager Anna Glenn might be able to help the owners—handsome handyman Sean and his bubbly grandma Ruby—save it from failure.A wedding reception starts on a rocky note, but when the party wraps up, it turns downright deadly. Before the guests can depart, Anna discovers Father Asher stabbed in the foyer. Baycourt isn’t only crumbling, it’s a hotbed of peril.Asher won’t be missed, not with his habit of stealing church funds. But with the fresh scandal of his death, the townsfolk recall previous trouble Baycourt has weathered—typical drama that comes with idiots gathering. Despite the current unsolved murder, Anna and her aunt Pru are focused on another Glenn sister, Josie, who disappeared after attending a funeral there many years ago. When Anna learns Josie wore a family heirloom Aunt Pru wishes to have back, Anna attempts to search for clues at Baycourt.Just as she finds a clue that suggests Josie’s locket might have gone missing at the hall, another reception begins. Hopefully, nothing further puts anyone in peril, or there’s no chance of saving Baycourt Hall—and Anna won’t be able to solve the mystery buried in her family history.  (Summary via Goodreads)

Aubrey Elle will have readers on the edge of their seats in her first book in the Missteps of Murder mystery series.  Peril at the Party is a pretty fast read once you open the book and start reading.....

In Peril at the Party Anna Glenn has returned to her hometown to live with her Aunt Pru after getting divorce and starts a new job at the Baycourt Hall where they cater to weddings and parties.  Unfortunately at her very first wedding celebration someone is stabbed in the foyer and it is Father Asher who just performed the wedding announcing a new husband and wife !!  Anna has a hard time accepting that someone would want Father Asher dead let alone killed !!  But as she talks to members of his church as well as some of the people at the wedding, she soon learns that Father Asher wasn't a nice person.  She also realizes that there is a list of people that have reasons to want him out of their lives....but are they killers ?

Ruby, the owner of Baycourt Hall asks Anna to go through boxes of old photographs to put together a collage of wedding pictures with happy couples so that they can work towards getting ahead of the situation.  While looking through the pictures,  Anna finds a few pictures of her Aunt Josie.  She has never met her aunt because she left town a long time ago but her Aunt Pru has talked about her and a necklace that Josie wore that means a lot to the family but when Anna finds two pictures and one of them shows Josie without the necklace, they wonder what happened to it and Josie.

Now it seems like Anna has two mysteries to solve so that she can keep her job and help restore Baycourt Hall and get the business thriving again......but when Sean, Ruby's grandson, finds something after a fight occurs at the wedding after Father Asher's murder, they wonder if the place is cursed and they are left with a bigger mystery on their hands......

Elle knows how to keep the reader wanting more.....there is NO way you will not be a fan of this series  !!  After reading Peril at the Party Elle leaves the reader needing to continue when the second book comes out.  I am sure that Death at the Dance is going to be as explosive as Peril at the Party and I cannot wait to dig in !!!