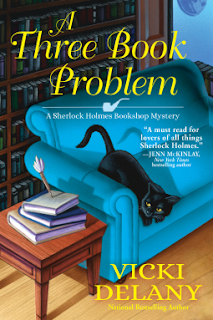 Gemma Doyle is back on the case in bestselling author Vicki Delany's seventh Sherlock Holmes Bookshop mystery when a poisoned dart ends in demise.It's a crisp, early October weekend, and business is slowing down as fall descends at the Sherlock Holmes Bookshop and Emporium and adjacent Mrs. Hudson's Tea Room. Wealthy philanthropist and prominent Sherlockian David Masterson has rented Suffolk Gardens House, where he plans to entertain his friends in a traditional English country house weekend.As the chosen caterers, Jayne Watson and Gemma Doyle get to work preparing lavish meals and setting up Sherlockian books and props for entertainment. Meanwhile, police detective Ryan Ashburton has taken time away from his duties to assist in the kitchen. It quickly becomes apparent that David's guests don't like each other--or their host. Plus, some of them aren't even acquainted with the adventures of the Great Detective.Before Gemma can ponder their relationships a poisoned dart sails through the window of the library, presenting Gemma Doyle with a three-book problem.  (Summary via Goodreads)

A Three Book Problem by Vicki Delany is the seventh book in her Sherlock Holmes Bookshop Mystery series and I sure hope that you are a fan as much as I am.

In A Three Book Problem Gemma and Jayne are catering a weekend long Sherlock Holmes related event in a big estate called Suffolk Gardens House.  David Masterson is the event coordinator and he has invited a group of friends to spend the weekend and do all things English and Sherlock Holmes related.  Gemma has brought along her boyfriend, police detective Ryan, to help in the kitchen.  Lucky for them that Ryan is there because when Gemma and Jayne are meeting with David to discuss a planned dinner menu, he is murdered.  And even though they are both there when he falls, they have no idea what caused his death.

They also learn that the group that they thought were friends are far from that.  David's niece and nephew are there acting as butler and maid and they are not too happy about the degrading roles.  As Ryan interviews and investigates David's murder, Gemma does what she does best and observes and looks into things in her own way.

Delany keeps readers on the edge of their seat when reading the books in this series and A Three Book Problem is no different.  The cast of characters that she has provided will also keep you turning the pages as quickly as you can.....you will want to get to the bottom of things and find out who killed David and why.  Everyone involved seems to have some reason for disliking him as well as each other it seems.  As you get deep into the story and realize that the group was anything but friends, you may start wondering why there was only one murder.....but know that with Gemma and Ryan, they will solve the case and arrest the right person for the crime.