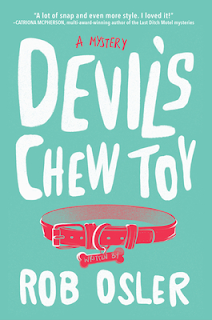 Seattle teacher and part-time blogger Hayden McCall wakes up in a stranger's bed alone, half-naked and sporting one hell of a shiner. Then the police come knocking on the door. It seems that Latino dancer Camilo Rodriguez has gone missing and they suspect foul play. What happened the night before? And where is Camilo?Determined to find answers, Hayden seeks out two of Camilo's friends--Hollister and Burley--both lesbians and both fiercely devoted to their friend. From them, Hayden learns that Camilo is a "Dreamer" whose parents had been deported years earlier, and whose sister, Daniela, is presumed to have returned to Venezuela with them. Convinced that the cops won't take a brown boy's disappearance seriously, the girls join Hayden's hunt for Camilo.The first clues turn up at Barkingham Palace, a pet store where Camilo had taken a part-time job. The store's owner, Della Rupert, claims ignorance, but Hayden knows something is up. And then there's Camilo's ex-boyfriend, Ryan, who's suddenly grown inexplicably wealthy. When Hayden and Hollister follow Ryan to a secure airport warehouse, they make a shocking connection between him and Della--and uncover the twisted scheme that's made both of them rich.The trail of clues leads them to the grounds of a magnificent estate on an island in Puget Sound, where they'll finally learn the truth about Camilo's disappearance--and the fate of his family.  (Summary via Goodreads)

Devil's Chew Toy by Rob Osler is a unique and interesting take on the cozy mystery.  Readers will thoroughly enjoy this story for all the little differences that are within the covers.

In Devil's Chew Toy main character Hayden McCall is on break from his teaching job so he goes to a local club he likes, Hunters, where he can sit and watch the male dancers and enjoy the night.....yes, Hayden is gay and enjoys looking at male dancers, now let's move on..... So one night he is there and decides to tip one of the dancers that he particularly likes but when he does, the dancer, Camilo, accidentally kicks Hayden in the face.  Whether it is because he kicked Hayden or likes him, we can't be 100% sure which, but he invites Hayden back to his place.  Unfortunately this does not goes well for either of them.....they go to bed and sleep, no hanky panky on the first meet for Camilo, and when Hayden wakes up, he is alone in the bed and the cops are knocking on the door.  Camilo's truck was found in a parking lot with the driver's door open and engine running with no sign of Camilo.  Hayden unfortunately cannot tell the cops anything.  He doesn't even know when Camilo left and what made him leave.   Also Hayden is sporting a nice big black eye that the cops look at suspiciously.

Even though Hayden doesn't really know Camilo, he is concerned about him being missing.  Also Camilo has a dog, Commander, that Hayden decides to take home with him rather than take him to a shelter or leave alone at Camilo's.

Seeing as Hayden doesn't know Camilo that well he decides to go back to Hunters and ask around and try to talk to some of his friends to see if they can shed some light on his disappearance.  Luckily Hayden gets some information from the manager and gets introduced to Hollister who is a lesbian with a big mohawk and the two of them team up to find Camilo.  Unfortunately when they start investigating they are led down a crazy road they couldn't have imagined no matter how hard they tried.  The one thing that the two of them have going for them is their drive to find Camilo.......but that won't be enough.

Readers will love Devil's Play Toy for Osler's take on the story.  Reading it from a completely different viewpoint, that of a gay character, is a refreshing change of pace.  You cannot help but fall in love with Hayden whether you are gay or not, he grows on you and you want to see him succeed and rescue Camilo.  And the relationships that develop as a result with definitely have you turning the pages as quickly as you can because you cannot get enough of it all !!!

I highly suggest that you get your copy of Devil's Chew Toy and get lost with Hayden and company....you will thank me later !!!  Happy reading !!!