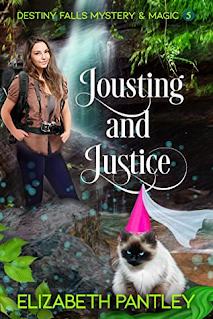 An invitation to a medieval festival. A ferry ride to a mysterious island. A scheming, inept witch. An office break-in, an unidentified body, and a string of suspects. Can Hayden, her brave, sassy cat, Latifa, and the people of Destiny Falls solve the mystery and enjoy the festival?~ Jousting and Justice follows the series format of combining two stories that blend into one. A murder mystery and the island mystery.The Island Mystery: Hayden and all her friends get an invitation to a medieval festival - but it's on "the forbidden island." It's too enticing to pass up. Of course, strange things will happen once they get there! . . . You'll also learn the truth about the witch's sister in this book!The Murder Mystery: A dead body shows up in the most shocking place. First, they need to figure out who this dead guy is. Then, who killed him and why. There are so many twists and turns on the way to the answers! But we know that Hayden, Latifa, and their family and friends will figure it out and justice will be served.Hayden’s many adventures in Destiny Falls will keep you guessing with each book in this intriguing series.  (Summary via Goodreads)

I am a huge fan of the Destiny Falls Mystery series by Elizabeth Pantley but nothing prepares you for what is in store for readers in the fifth book in this series, Jousting and Justice...... The entire book is going to shock readers and when you get to the end and think you are in the clear, Pantley throws a huge wrench in the mix and leaves the reader in complete disbelief and unable to move, you will be as frozen as Destiny Falls is when Hayden gets visits from the ghost Gaspar.

In Jousting and Justice there is a lot going on but readers of this series should already have the understanding that no matter what happens, you will not get lost at all.  First off the entire island of Destiny Falls is invited to a medieval festival and they believe it is on the forbidden island Gladstone.  Hayden and her brother Axel are excited to go because that is where their mother is living and recently their father went to live with her so they are hopeful to see them both.  But while they are learning more on medieval festivals, the clothing and picking out their outfits for the event, Hayden finds her office for the newspaper a mess and a dead body in the archive room.  And when they find out the identity of the deceased, they uncover a lot of secrets behind this person as well as a lot of suspects and reasons to want him dead.

Fortunately they can leave the investigating in the able hands of their dear friend, Sheriff Jaxson Redford, so they could focus on the festival and preparing for that.  Unfortunately when they arrive at the island for the festival, they find out that they are not at Gladstone but a smaller island actually called the forbidden island.  They decide to not let that fact ruin their day so the group go about the day enjoying the festival.  Unfortunately there is some excited while they are participating in the final event, a parade of all the winners from the days competitions...... I will leave it at that because I do not want to spoil it for those that will read this book.

There is so much to love about the Destiny Falls Mystery series..... an entire island that has magical components throughout the island, people with magical abilities, cats that can talk to Hayden and she understands them, a strong family bond and friendships that are just as strong, humor, murder, love..... so much !!!!

I will leave the readers with this..... every time I read the latest book in this series, it becomes my favorite book in the series.  That is still true with Jousting and Justice however.... I did not like the way that Pantley ended this book !!  She always ends her books with readers being left speechless and wanting more....this time she leaves readers with mouths opened wide, speechless and unable to comprehend what they just read....some may do what I did and over look the two words, The End, and turn the page anyway to see if possibly there is more.  Pantley knows how to leave the readers entertained but hooked and looking forward to the next book.  I honestly do not know how I am going to be able to wait for the sixth book......maybe I can start a support group and we can all help each other get through the time.....