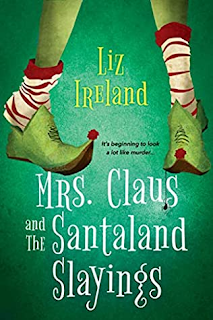 It's the first Christmas in Santaland for April Claus--but it may also be her last unless she can uncover a villain with a killer Christmas wish. . . Love is full of surprises--though few compare to realizing that you're marrying the real-life Santa. April Claus dearly loves her new husband, Nick, but adjusting to life in the North Pole is not all sugarplums and candy canes. Especially when a cantankerous elf named Giblet Hollyberry is killed--felled by a black widow spider in his stocking--shortly after publicly arguing with Nick.Christmastown is hardly a hotbed of crime, aside from mishaps caused by too much eggnog, but April disagrees with Constable Crinkle's verdict of accidental death. As April sets out to find the culprit, it'll mean putting the future of Christmas on the line--and hoping her own name isn't on a lethal naughty list . . .  (Summary via Goodreads)
I did NOT want to finish reading Mrs. Claus and the Santaland Slayings by Liz Ireland.  This book was so fun to read and the way Ireland writes and describes things, your imagination will explode !!  You will feel like you can clearly see everything and feel the cold !!
Main character April is newly married to Santa Claus.  Yes that is what I said and it's true !!  She met him when he was on vacation and staying at her inn, The Coast Inn, in Cloudberry Bay in Oregon.  They had a whirlwind romance that turned into a marriage and April moving to Santaland and taking on some responsibilities as the new Mrs. Claus.  This is going to also be Nick's first Christmas as Santa Claus.  Nick's brother Chris was the last Santa but was killed during a hunting excursion a few months back.
April and Nick live in Castle Kringle in Christmastown with Nick's mother who is the dowager Mrs. Claus and still handles most of the household responsibilities.  Also living in the Castle are Martin and Lucia, Nicks's brother and sister, Tiffany, Chris' widow, and their son Christopher.  In Santaland not only are humans living there but there are elves, reindeers that talk as well as talking, moving snowmen !!!  It is definitely a place I want to visit !!
It is the week before Christmas and there is a lot for the family to do to prepare for the big day as well as a lot of festivities in town.  Unfortunately when Nick is told that an elf has been killed, he rushes to find out what happened.  Later that day one of the snowmen is found murdered, blow torched to just a puddle.
Sadly everything points to Nick as the main suspect and when the town calls on Detective Jake, not Jack, Frost to come to town to investigate, everyone knows that things are serious !!  Even April is suspicious of Nick......
Christmas is doomed  !!!  Unless April can find out what happened to the elf and snowman and clear Nicks name.
Mrs. Claus and the Santaland Slayings is like a Hallmark movie that took a wrong turn.  Or like a Lifetime movie with a kick !
Mrs. Claus and the Santaland Slayings is a must read !!  Not only will it attract the mystery lover part of your brain but it will attract the Christmas spirit in you.  With talking reindeer, elves and Santa how can you not want to make a cup of cocoa and settle in ?  There is a lot to love with this book and I am very,very glad that it says that it is Mrs. Claus #1 which means that there will be more books in this series and I cannot wait !!!  I feel like a kid on Christmas Eve waiting for Santa to show up.......
Review by Missi M.
Posted by Cozy Mystery Book Reviews at 12:24