Hanging By a Thread (Second Treasures Mysteries #3) by Margaret Evans 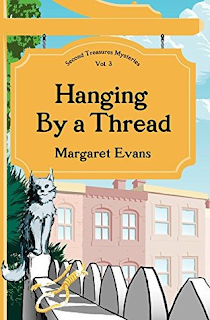 The evidence hangs on threads from a garment in Laura Keene’s thrift shop, a suit less than a year old but belonging to a young man who has left town, or so everyone thinks. During the town’s annual St. Patrick’s Day parade, a terrible discovery is made, and a story of blackmail, jealousy and greed are brought to light in the third installment of Margaret Evans's thrilling Second Treasures Mysteries, “Hanging By a Thread.”   (Summary via Goodreads)

There is no way readers cannot be fans of the Second Treasures Mystery series by Margaret Evans.  Once you read the first book, Twice Sold Murder, she leaves readers with unanswered questions that make it a must to return to the series with Priced to Kill, the second book and so on.  And Hanging By a Thread, the third book in this series will leave readers with main character Laura Keene coming to a realization with the last line of the book......but the answer to that realization will not be revealed until the fourth book......we hope !!

In the Second Treasures Mystery series Laura Keene has moved back to her hometown of Raging Ford in Minnesota after she left 11 years ago when her parents were murdered and she moved to live with her great-aunt Rose.  After her great-aunt died she decided to move back home where she opened up Second Treasures, a thrift shop.  She also lives above the store and has reconnected with some close friends and has taken one of those friendships to the next level.  Laura and Sergeant Connor Fitzpatrick had been best buds growing up and now that she has moved back home and they are adults, they have decided to start dating and see where that leads.....if only Laura can stay out of murder investigations.

In Hanging By a Thread the town is getting ready to celebrate St. Patrick's Day and Laura is doing a lot inside the store to promote the holiday.  She is also still preparing taxes for some people as well as being on the St. Patrick's Day celebration committee.  She always has a lot on her plate but when a sports jacket appears in a bag for donation at her front door and the jacket is a custom made jacket with the owner's name being that of a local man that worked at the bank but disappeared 2 years ago, you know Laura is going to have to find answers.  And, of course, Connor cannot help her because it is an open investigation.  When another employee from the bank is reported missing and the supervisor looks into the employees work log, she finds some very questionable activity.

Even when Laura tries to stay out of things, it seems she has a magnetic pull and she can't seem to turn her brain off from thinking about things and trying to find answers to questions......no matter how many times Connor begs her to stop.

No only is Laura continuing to find out what happened to her parents and who killed them with every book, there is also a "new" case to help solve and when the police make her a police consultant, the door is wide open for her to help the police.

I love this series and the fact that Evans always leaves readers with a cliff hanging finish guaranteeing that you will be back to read the next book and with Hanging By a Thread the last 3 sentences will leave you speechless and shocked !!!  I cannot get to A Dress to Die For fast enough !!!