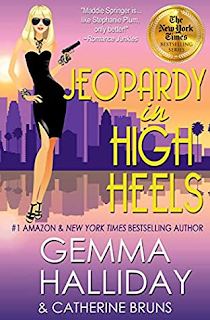 When death hits a contestant on America's favorite game show, fashion designer turned amateur sleuth is on the case!I'll take "What is Murder" for $200 please, Alex?Maddie Springer may know more about fabulous heels than tough trivia, but she's thrilled when her hairdresser-to-the-stars stepfather, Fernando, earns a spot on a celebrity edition of American's favorite game show. But she's not so thrilled when, after taping ends, one of the other contestants dies, the media are suddenly everywhere, and one reporter in particular is threatening to not only point the finger at Fernando, but also expose his biggest secrets to the world!The victim was Doggy Z, a famous rap artist turned recreational marijuana supporter turned cooking show co-host. And it seems everyone in his life had a reason to want him dead—from the 4 ex-wives he was serially unfaithful to, to his deceptively wholesome looking cooking show co-host, to the network executive seen arguing with Dog just before his death, and even the soap opera star who competed against him on the trivia show. Now it's up to Maddie to sift through the suspects and figure out just which person the rapper may have wronged enough to want him dead. With the help of her Hollywood BFF, her hot homicide detective husband, and her endearingly meddling mom, can Maddie track down a cold blooded killer... before she finds herself in final jeopardy?  (Summary via Goodreads)

A book written by Gemma Halliday AND Catherine Bruns.....well reading that is a no brainer !!! These two authors are amazing by themselves but when put together their writing talent is explosive !!!!

Jeopardy in High Heels is the twelfth book in the High Heels Mystery series and you are going to be in love !!  There is so much within this book to capture readers attention and continue its firm grasp on it until you finish the book.

Main character Maddie has a busy life.  She is married to a police detective, has twins in preschool, is a fashion shoe designer, has a best friend, Dana, who is an actress and family that she will do anything for !!

In Jeopardy in High Heels Maddie's step-father who is the owner of Fernando's which is a hair salon that caters to the famous and rich is a contestant on Celebrity Jeopardy.  Maddie and Dana are in the audience with Maddie's mom and her best friend to cheer him on.  The other two contestants are an actress on a soap opera and a rapper by the name of Doggy Z.  During the taping of the show it appears that Doggy Z is more out of it than he usually is.  It is rumored that he is always high but during the taping he looks like he is completely out of it.

That evening Maddie's husband, Ramirez, is called into work.  It isn't until later that evening that she learns that the case that he was called into was for Doggy Z.  He was found dead at him home that evening.  Of course Maddie cannot stop thinking about his performance during the taping of Jeopardy and when a gossip reporter finds out that her husband is working on the case, she wants insider information.  Maddie refuses to give in to her until she threatens to out Fernando for the fraud that he is which could destroy his business.  So Maddie, Dana and gossip reporter Tina "work together" to solve the case keeping Fernando's secret safe.

There is a LONG list of suspects regarding Doggy Z's murder...... and 4 of them are his ex-wives !!  Maddie and Dana take it upon themselves to look into his death and though Maddie has a lot on her plate and her husband is the detective assigned to the case and they should really just let him do his job, they are pulled into it.....

Jeopardy in High Heels is such a fun story to read with the characters and the storyline.  Readers cannot help but enjoy it....who doesn't like Jeopardy ?  We may not know the answers or who killed Doggy Z but what's the harm of riding along with Maddie while she looks into it ??

I thoroughly enjoyed this book and knowing it was written by a dynamic duo made it that much better.  Halliday and Bruns alone are magnificient in their storytelling abilities but when paired together, it is a masterpiece !!!