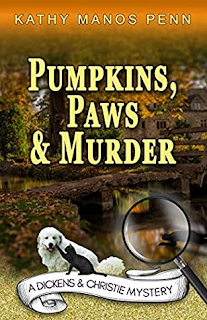 A Cotswolds village—a Fall Fête—TWO four-legged sleuths—and a murder!Leta Parker is back with her talkative companions—Dickens the dog and Christie the cat.Though Leta’s still haunted by her tragic loss, moving from Atlanta to the village of Astonbury has given her a new lease on life.Leta’s days are filled with yoga, book club, walks with Dickens, naps with Christie, and outings with friends. Add preparations for the Astonbury Fall Fête—complete with scarecrows, pumpkins, and costumes—and she’s beyond busy.All is well until a dead body is discovered on the riverbank, and once again, Leta and her sleuthing girlfriends are drawn into a search for a killer—a search that takes them to Dartmouth on the coast of England.Will touring Agatha Christie’s summer home help them access their inner Miss Marples?Will Dickens sniff out clues closer to home? Or will Christie the cat outthink them all?Discover the answers—and a recipe—in Pumpkins, Paws, & Murder, book two in Kathy Manos Penn’s Cozy Animal Mystery Series.   (Summary via Goodreads)

I became a fan of the Dickens & Christie Mystery series by Kathy Manos Penn when I read the first book in the series, Bells, Tails, & Murder.  I mean how can readers not fall in love with a book where the main character can talk to and understand their cat and dog ???

Main character Leta moved from the United States across the pond to a little village, Astonbury in the Cotswolds in England after her husband Henry passed away.  Within a short time she has made a great circle of friends and seems to be adapting quite well.....that is until she gets involved with murder cases.

In Pumpkins, Paws, & Murder, the second book in this series, the village is getting ready for the Astonbury Fall Fete at The Olde Mill Inn.  A fete is a celebration or festival.  Leta is dressing up as Dorothy from The Wizard of Oz and her dog, Dickens, is going to be Toto.  There is a lot going on the day of the Fete, as we can all imagine, and it seems like it went off without a hitch.....until the next morning when the body of the magician from the Fete is found behind the Inn on the riverbank.  You would think with Detective Sergeant Gemma living in the cottage behind the Inn that it would be an open and shut case but that is not the way it is.

Leta and a few of her friends, mainly Wendy and her 90 year old mother Belle, "helped" Gemma solve a murder before so they decide to "help" again.  And when they find out that Trixie, the niece of their friend Beatrix, is on the suspect list, they jump in feet first.  They know that Trixie wouldn't harm anyone but they know that they cannot go on just their word and their impressions of people so they decide to do a little investigating.  And with the Fete having drawn in people from all over, they have their work cut out for them.  And surprisingly Gemma seems to have given in to allowing them to help.

Readers will thoroughly enjoy Pumpkins, Paws & Murder, as well as the first book, in this series.  The author makes it so easy to follow along and even provides a list of the cast of characters at the beginning of the story so that you can go back at any time to get to know someone.  And the fact that Leta can talk to her two pets as well as a few other area animals is such a delight especially if you own cats or dogs and you "talk" to them.  You wll see your animals within them.  I highly recommend getting these books and getting lost in this quaint little village and get ready for the next installment..... I know I am looking forward to November when the third book is being released.......