Bert and Norah: The Nickel Dime Murders by Bernard Burgess 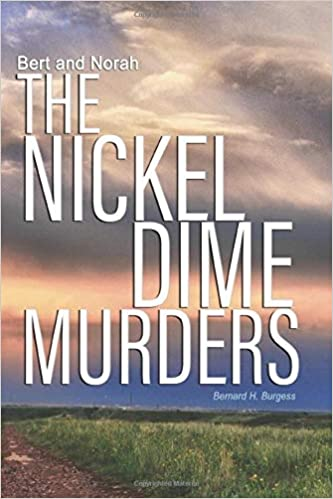 Murder sets the stage for a mystery woven around the undying love between a husband and wife private investigation team. Set under the wide open skies of the upper Mid-west, the beauty and serenity of this expansive country is in stark contrast to the dark side of humanity being pursued by B and N Investigations. Norah's psychic abilities are combined with Bert's intuitive logic and the nose of their exceptional tracking animal, a coyote-wolf hybrid named Missy. Their combined skills make them unusually gifted at finding missing people. However, unusual circumstances draw them into the wake of a cunning and brutal killer. They begin to realize that they alone possess the unique skills to bring this case to a final and suspenseful conclusion. Don't be surprised if you say, "Wow, I did not see that coming!"   (Summary via Goodreads)

At the end of the summary of The Nickel Dime Murders by Bernard Burgess on Goodreads it states ... Don't be surprised if you say, "Wow, I did not see that coming."  When readers get to the last page that is EXACTLY what they are going to say !!!  I am still in shock !!

I have to be very careful with what I share about this book in my review because I really do not want to indicate anything that will potentially ruin the explosive ending .....

The Nickel Dime Murders is the first book in the Bert and Norah Mystery series and I was hooked when I opened the book to start reading it and the first chapter is titled "Missy".... seeing as that is my first name I was excited....yeah, I know what a dork !!!  Anyway Bert and his wife Norah have started a private investigative company with 2 unique qualities.  First is Missy... Missy is a coywolf that Bert rescued when she was a newborn and he took her home and raised and trained her and now she helps track missing people by using her great sense of smell.  The second unique quality is that Norah is a psychic and gets visions that help solve cases.

The Nickel Dime Murders starts a multipy states manhunt for 1 or 2 killers, it is unclear the number involved in the killings.  Bert and Norah are hired to find a woman's parents who have been missing for a couple of weeks and the police aren't taking the case seriously.  There is no evidence of foul play, it just looks like the couple got in their vehicle and drove away but the daughter knows that they would not do that for that long of a time.  Bert and Norah take the case and with Norah's visions and Missy's tracking skills, they locate the couple but unfortunately they are too late and it is obvious that they were murdered.  Bert searches the house and the only thing that he finds odd is that there two dimes and a nickel lined up on a dresser and Norah is having visions of the coins.  When the next case they are hired for is very similar to that case, this leads them down a very strange path.......and with Norah's vision and the use of Missy's tracking skills, it is very difficult to involve the local police.

I strongly encourage, and cannot stress it enough, to readers to go grab your copy of The Nickel Dime Murders by Bernard Burgess.  This book will blow your mind in so many ways !!!  I cannot wait until I open up the second book in this series to see where the road leads Bert, Norah and Missy....wherever it goes, I plan to be along for the ride.