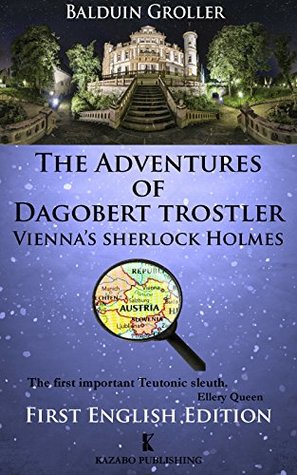 The first important Teutonic sleuth. Ellery Queen Dagobert Trostler is the Sherlock Holmes of Vienna . . . with a twist. Like Holmes, he's the most famous private investigator in Vienna. Unlike Holmes, he's a bit of a party animal. While he loves a good mystery, he also loves good food, good company and a good time. He's a bon-vivant and right at home in the brilliant social scene of Vienna in the heyday of the Austro-Hungarian Empire. These stories, written by Balduin Groller and published in Vienna between 1889 and 1910, are a glimpse into the sparkling, forgotten world of turn-of-the-century Vienna. Hugely popular in the German-speaking world, they are now available in English for the first time exclusively from Kazabo Publishing. If you love Sherlock Holmes, you need to read these stories! Contents:"The Fine Cigars""The Great Embezzlement""Anonymous Letters""An Arrest""The Cheat""The Mysterious Box""The Adventures of Dagobert Trostler" is the first in a series. Watch for The Memoirs of Dagobert Trostler and The Casebook of Dagobert Trostler.   (Summary via Goodreads)
If you have a free afternoon or you are just finishing a book and unsure what book you will open next, I recommend The Adventures of Dagobert Trostler : Vienna's Sherlock Holmes by Balduin Groller.  The Adventures of Dagobert Trostler is a book with six short stories in it.  You can take your time reading each story within a short time.  You can read them in order, which I did, or can pick them according to title of whatever looks most interesting given your current mood.
In the stories readers are introduced to Dagobert Trostler who investigates crime, small or large, personal or impersonal, and brings justice to those involved.  He likes to do it quietly, without scandal.  However he loves to tell the story of how he went about capturing the person who did wrong.
In most of the stories in this book, Dagobert is in the company of a dear friend and his wife, Andreas and Violet Grumbach, who have used his services on a number of occasions but who also love to hear him tell stories of other crimes he solved.
These stories are written during the turn of the century when times were a lot different than they are now.  In order to solve a crime, a person had to rely a lot on observation, conversations and wits.  And Dagobert does all of that quite nicely.  Reading the stories within this book will take readers back in time and allow you to just read the stories and get lost in what is going on.
Reading books allow readers to escape their life for a period of time and get lost in someone else's world and Groller does that splendidly.  While reading this book, you will escape to another time period and place and you may not want to close the book and return to your life....so I encourage you to read slowly or at least try to....once you get lost in the story, you will be powerless to let go.
Review by Missi M.
Posted by Cozy Mystery Book Reviews at 08:59