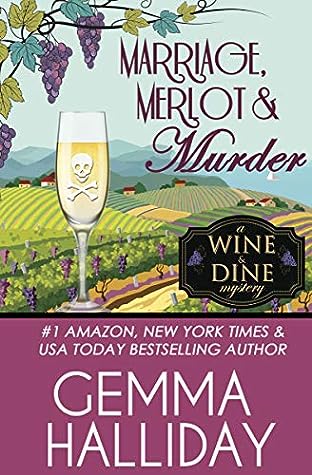 Emmy Oak is hosting her first wedding at her family's Oak Valley Vineyards, and she's worked hard to make sure it goes smoothly. And why wouldn't it? The blushing bride is beautiful, the groom is charming, and the parents-of-the-bride are paying Emmy a tidy fee that may just put her struggling winery in the black next month. Only all her best laid plans fizzle faster than flat champagne when the groom goes missing just moments before the ceremony...and Emmy finds him bludgeoned to death on her terrace! Suddenly Emmy's dream wedding turns into a crime scene, and when the entirely-too-enticing Detective Christopher Grant sets his sights on the wrong suspect, Emmy knows it's up to her to find out who committed the matrimonial murder. Was it the overprotective father-of-the-bride who seems to be harboring secrets of his own? The jealous ex-boyfriend with a violent streak? The victim's calloused and cunning cousin? Or was the groom charming women other than his fiancée...and his philandering ways finally caught up to him? Emmy isn't sure, but the deeper she digs, the more she realizes the victim wasn't exactly innocent...and his killer may threaten to strike again!**Simple and delicious recipes & affordable wine pairings included!**"Ms. Halliday is the undisputed queen of the genre: she knows how to blend fashion, suspense, laughter, and romance in all the right doses."~ Fresh Fiction"I rank A Sip Before Dying as one of my favorite fun reads. I say to Gemma Halliday, well done!"~ The Book Breeze"The Wine & Dine Mystery series is a definite to read and keep an eye out for more to follow."~ Cozy Mystery Book ReviewWine & Dine Mysteries:A Sip Before Dying - book #1Chocolate Covered Death - book #2Victim in the Vineyard - book #3Marriage, Merlot & Murder - book #4Death in Wine Country - book #5Fashion, Rosé & Foul Play - book #6Rating: This story does not contain any graphic violence, language, or sexual encounters. Its rating would be similar to PG-13 or what you would find on a Hallmark Channel movie or TV series.   (Summary via Goodreads)
Gemma Halliday knows how to tell a story !!!  I love her Wine & Dine Mystery series and every time I read one of these books, I fall deeper and deeper in love !!
Marriage, Merlot & Murder has main character Emmy Oak gearing up to host the very first wedding at her family winery, Oak Valley Vineyards and, of course, her best friend Ava Barnett is there to help.  Emmy has done everything she can possibly do to ensure that the bride has the fairy tale wedding of her dreams and the bride, Juliet, is absolutely a princess.  However before the bride can say I do and take the steps to her happily even after, the groom Freddie ends up late for the ceremony......and when Emmy goes looking for him, she finds him dead......and there are a lot of likely candidates for his murder !!
Emmy knows that she should leave the murder to her "kind of" boyfriend, Detective Chris Grant, but she feels really bad for Juliet so she figures she can ask a few people a few questions.  Emmy also feels that the best candidate for Freddie's murder is Juliet's dad and seeing as he still owes her for the wedding that didn't happen, she feels this is her opening.  Unfortunately there seems to be a lot of people that could have been the one to kill Freddie when Emmy finds out more about the bride, groom, their wedding party and their lives.
As Emmy and Ava dig into the groom and his past, they find a lot more bad things than good things and they start to really feel protective of Juliet.  Even though they are beginning to be thankful that the wedding didn't happen, they want to find out what happened to Freddie so that they can help Juliet process things and move forward with her life......even if it might be the end of Emmy's !!!
I just LOVE the Wine & Dine Mystery series and I have to say I think that Marriage, Merlot & Murder has to be my favorite.....at least until I read the next book in the series.  As this book is the fourth book and I have read the previous three, I have to say that I am a devoted fan and an invested reader and feel like a part of Emmy's life.  Yes I know that it is fake and just a story....but when you are reading it you feel like it is real and you are right there along side Emmy in everything she is doing....even if it is just hanging out with Ava.  Halliday has created a great cast of characters in this series along with a fantastic setting, the winery.  I could read a story about Emmy and her life without a murder happening and Emmy and Ava getting in the middle of it....although it might make things less interesting when it comes to her dealings with Grant.
I highly recommend grabbing Mariage, Merlot & Murder, of any of the books in this series and grabbing a glass of wine or cup of coffee and settling back in your comfy chair and letting Halliday and Emmy take over your mind for a few hours...... you will totally thank me !!!
Review by Missi M.
Posted by Cozy Mystery Book Reviews at 13:56