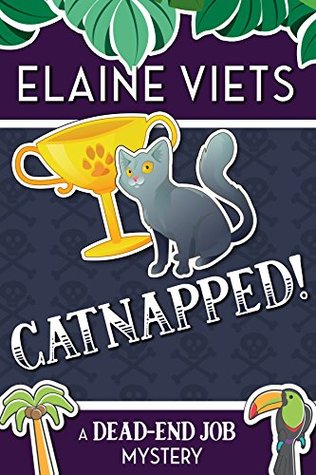 From Anthony and Agatha Award-winning author Elaine Viets—the thrilling mystery series about one woman trying to make a living... while other people are making a killing.

If there’s one thing the very wealthy might value even more than their money, it’s their precious pets. So when local socialite Trish Barrymore hires Helen Hawthorne and Phil Sagemont to recover her beloved show cat—named January’s Jubilee Justine—from her ex-husband Mortimer, the case seems simple enough.

But when the husband-and-wife PI team show up to take possession of Justine, they’re greeted not by a cute kitten but a murdered Mort—knocked on the noggin by a mahogany cat tower. And the feline is nowhere to be found.

To get the scoop on who could have committed the dire deed, Helen takes a job as a cat groomer. But as she navigates the cutthroat world of cat shows—and their equally catty owners—she discovers there is much more to the crime than just a purloined pussycat…

“A stubborn and intelligent heroine, a wonderful South Florida setting, and a cast of more-or-less lethal bimbos...I loved this book.”—Charlaine Harris
“Brave Viets preps by actually working the jobs she describes in loving and hilarious detail, giving her offbeat series a healthy balance between the banal and the bizarre.” —Kirkus Reviews
“Laugh-out-loud comedy with enough twists and turns to make it to the top of the mystery bestseller charts.” —Florida Today
“Fans of Janet Evanovich and Parnell Hall will appreciate Viets’s humor.”—South Florida Sun-Sentinel
“Wit, murder, and sunshine . . . it must be Florida. I love this new series.”—Nancy Pickard
“A heroine with a sense of humor and a gift for snappy dialogue.”—Jane Heller   (Summary via Goodreads)
I am a huge fan of the Dead-End Job Mystery series by Elaine Viets and I am amazed how Viets keeps coming up with dead-end jobs for main character Helen Hawthorne to apply for and get.  Catnapped is the thirteenth book in this series and boy oh boy will it capture your attention !!!
When the Dead-End job Mystery series starts Helen had left her cushy life in St. Louis after catching her husband cheating on her and when she filed for divorce, the judge awarded her ex-husband half of her future earnings.  She vowed that he would never get another dime out of her so she left and drove until her car broke down in Ft. Lauderdale.  She got an apartment and started getting "dead-end jobs" staying under the radar so she wouldn't get found out.  Luckily for her she moved into the Coronado Tropics Apartments where her landlady is like her second mother and she fell in love with her neighbor Phil.  Things gradually worked out for Helen so that now (in recent books) she and Phil have their own business as private investigators which is good because Helen seems to always find herself in the middle of a murder investigation.
In Catnapped Helen and Phil are looking for a kitten, Justine, whose "parents" are going through a messy divorce but have an agreement regarding visitation for Justine.  Justine was suppose to be returned to her "mother" Trish but when her "father" Mort fails to return her, Trish has her lawyer contact Helen and Phil to retrieve Justine.  Unfortunately when they arrive at Mort's house, they find him dead with no sign of Justine.  Shortly after Trish receives a call looking for ransom money for the return of Justine so Helen goes undercover at a cat cattery to try to find out where Justine is and who may have killed Mort.  Phil does his part by looking into things via the internet.
Before they can solve that case Margery, their landlord, has a confrontation with her ex-husband, Zach, who she hasn't seen in 30 years.  Shortly after the confrontation he is found dead and Margery is arrested for his murder !!!
Helen and Phil have their hands full in Catnapped dealing with all these cases .... and the Coronado is not the same without Margery there so they have to do whatever they can to find out who killed Zach so that she can come home !!!
There is so much in this series to capture readers attention and you will want to move into the Coronado so that you can enjoy your evenings hanging around the pool with the gang and a glass of boxed wine.  You will fall in love with Helen and all her dead-end jobs and her relationship with Phil will capture your heart.  I long for every time I can open a book in this series and escape to Ft. Lauderdale without leaving my couch or packing a suitcase.......
If you haven't read any of the books in this series that is okay.  You don't have to read the books in any kind of order and can pick up any of them and not be lost at all.  However, if I were you, I would want to read ALL of the books in the series.  Readers cannot help but fall in love with Helen and as she grows throughout the series, you will also.
Review by Missi M.
Posted by Cozy Mystery Book Reviews at 14:17