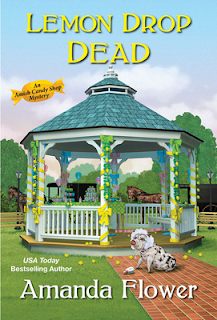 Murder always leaves a sour taste . . .Although baby showers aren’t an Amish tradition, Bailey King wants to celebrate Emily Keim’s forthcoming bundle of joy. It’s the least she can do for her hardworking assistant at Swissmen Sweets, especially with Emily being estranged from her siblings. Everyone in Harvest, Ohio has gathered at the town gazebo—decked out in lemon-themed décor to add some of Emily’s favorite flavor to the festivities—including Juliet Brook, Jethro the Pig, and in a last-minute invite, Emily’s sister Esther Esh.But Esther isn’t the only surprise guest. A mysterious Amish woman confronts Emily claiming to know about her secret shame—the child she had as a teenager who was given up for adoption. The stranger vanishes before Bailey could find out who she was and if she knew what happened to Emily’s first baby. Later that evening, the woman reappears—dead in Esh Family Pretzels, with a threatening letter written by Esther found on her body.Emily knows her sister is not a murderer and convinces Bailey to help clear Esther’s name and put the squeeze on the real killer... (Summary via Goodreads)

Living the Amish lifestyle is suppose to be easier and less stressful in a way but that is far from the truth when it comes to the Amish Candy Shop Mystery series by Amanda Flower.  Bailey King is the main character and even though she is English, a lot of her upbringing was by her Amish grandparents.  In the town of Harvest, Ohio there is a very big Amish presence.  Bailey and her grandmother own and run Swissmen Sweets and right next door is the Esh Pretzel Shop....the Pretzel shop is run by an Amish family, brother and sister Abel and Esther, who do not like Bailey because they feel that she stole their sister, Emily, to work in the candy shop.  However in Lemon Drop Dead, the sixth book in the Amish Candy Shop Mystery series, the Esh's will need Bailey's help.....

The town of Harvest is a small, close community where everyone, English or Amish, helps each other and the ladies of town want to hold a baby shower for Emily who is recently married and expecting.  Emily is very hesitant to attend the shower because she is Amish and that is not the way they do things but also because this is not her first baby.  When Emily was a teenager she got pregnant, was sent away to have the baby and then the baby was given to another Amish family to raise.  Emily has never gotten over that and thinks of the daughter that was taken from her.

Emily does give in to the shower but is approach by a stranger and a few hours later this stranger is found murdered in the pretzel shop.  Bailey finds out that the murdered woman, Rosemary, is actually the adoptive mother of Emily's daughter and she wants Emily to meet her daughter Hannah. Unfortunately this doesn't happen and Bailey sets out on a course to solve Rosemary's murder, prove Esther is innocent and maybe get Emily and Hannah together as a family.

Solving Rosemary's murder isn't going to be easy seeing as when Bailey goes around questioning people she is told lies or can tell the person isn't telling her everything that they know.  Even though Bailey's boyfriend, Sheriff Deputy Aiden Brody, is quite capable of doing his job and solving murders, it seems Bailey is always one step in front on him.....

Reader's will fall in love with everything about this series....the people and the town are loveable and readers will want to pack a bag and visit, they have unique pets like an overweight rabbit and a black and white potbellied pig, the relationships are genuine and the storyline will grab your attention immediately and you will not want to let go.

I highly encourage reader's to grab a copy of Lemon Drop Dead and let Bailey and crew take you away.....