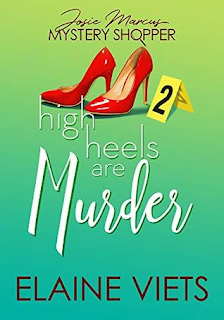 Mystery shopper Josie Marcus stumbles onto another murder when a sleazy shoe salesman is killed right after she gets him canned…Josie finally has her life back on track. Not only is the single mom dating the best (and hottest) barista in the St. Louis suburb of Maplewood, but also her boss just assigned her a coveted gig—mystery shopping the Soft Shoe. The exclusive store is a shoe lover’s dream, but its top seller, Mel Poulaine, is a waking nightmare. His hands-on fascination with feet goes far beyond professional interest. Josie’s scathing report kills Mel’s career…but later that night, someone kills Mel himself.Josie’s determined to stay out of it. But when Cheryl Malmy, daughter of Josie’s nosiest neighbor, becomes a suspect, Josie’s mom begs her to investigate. She’s shocked by what she uncovers. It turns out “Perfect Cheryl” has more than a few dirty secrets in her closet, drawing Josie deeper into the seedy suburban underbelly. But can she trip up a killer who always seems to be one step ahead?  (Summary via Goodreads)
High Heels Are Murder is the second book in the Josie Marcus, Mystery Shopper series by Elaine Viets and boy is it explosive !!!  How do authors come up with such crazy ideas ??
Josie Marcus loves her job as a mystery shopper, mainly for the flexibility it allows her so that she can spend time with her daughter.  Josie is able to drop her daughter Amelia off at school, go to whatever store she is assigned and then get back to pick up Amelia at school.  Josie is able to have dinner with Amelia and help her with homework.  Josie's mom, Jane, lives above them and there for them if Josie needs help.
In High Heels Are Murder Josie gets to mystery shop at Soft Shoe and try on expensive high heel shoes.  She is assigned to get the top salesman, Mel, to wait on her and see how he treats her.  There are complaints that Mel is a little off and more interested in the women's shoes and feet.  Unfortunately Josie does catch Mel in the "act" and her report ends up getting the top salesman fired.  And things go downhill rapidly when Josie finds out that he was murdered that same night and her neighbor's daughter is on the police's radar.
Josie and her neighbor, Mrs. Mueller, do not get along and it has been like that since Josie was a teenager.  And Mrs. Mueller's daughter, Cheryl, can do no wrong and Josie has had to listen to her mother talk about Cheryl like she was a goddess.  But everything changes when Mrs. Mueller asks Josie for her help proving her precious daughter is innocent.
So Josie and her best friend, Alyce, decide to follow Cheryl around to see what she is up to.  They know that she is hiding something but they cannot figure out what.....and when they do, they have no idea what to do with the information they uncover......
Reader's will learn more than they ever wanted to learn about feet and the things men like about women's feet.  The story will be crazy that you will not want to stop until Josie gets to the bottom of things.  Viets ability to grab readers attention always amazes me and I cannot get enough of Josie !!!
I highly recommend the Josie Marcus, Mystery Shopper series and know that readers will enjoy it as much, if not more, than I am.  I cannot wait to see what Josie gets herself in the middle of next.....
Review by Missi M.