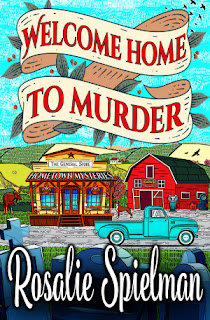 Tessa Treslow never wanted a small town life. As soon as she graduated high school, she happily escaped her tiny town to join the U.S. Army, leaving New Oslo, Idaho, population 852, firmly behind her. Twenty years later, the hometown hero is finally ready to come back—even if she has just a visit with loved ones in mind while her family is hoping to convince her to stay for good.With her fawn boxer dog, Vince, in tow, Tessa falls into the unsettlingly familiar small town life, helping out in her family's general store and her feisty Aunt Edna's auto body shop. But her peaceful homecoming is suddenly shattered when the dead body of a crooked con man turns up in her aunt's shop, and the police have some serious questions for the family. To make matters worse, the sheriff in charge just happens to be Tessa's ex-boyfriend... and things did not end well between them all those years ago. When it comes out that the con man was trying to get his hands on the family business, Tessa knows they're in trouble.With her family in danger of being dragged away in handcuffs, Tessa becomes a woman on a mission to find the con man's killer. Between a slew of suspects, a meandering moose, and a handsome newcomer with his eye on Tessa, she has her work cut out for her. But when the killer changes tactics—putting everything her family holds dear in jeopardy—Tessa begins to realize what home really means to her. Can she be the hero for her hometown once again... before it's too late?  (Summary via Goodreads)

Welcome Home to Murder by Rosalie Spielman is the debut book in her Hometown Mysteries series and she knows how to set the stage perfectly.....it is done flawlessly and you will be ready to move to New Oslo, Idaho and settle into small town living....even if main character Tessa Treslow isn't sure if she's staying or going.

In Welcome Home to Murder Tessa is returning home after a 20-year career in the Army.  She is also returning home to help her parents and aunt clean and go through her grandmother's house....even though her Aunt Edna lives there, they still need to clean out things.  Tessa is all for helping the family and when, on the night of her return, a dead body is found under a car in Aunt Edna's garage, she is all about finding out who did it.  She especially wants to find the killer when the local sheriff has Aunt Edna on the top of his suspect list.  Tessa cannot help but think he is still holding a grudge towards Tessa as they were dating when she left to join the Army.

As the story progresses there are more things that happen that point to Aunt Edna as the guilty party....although no one in town believes that she or anyone related to her would kill someone, things are not looking good for her.

Readers will fall in love with Welcome Home to Murder and will enjoy that the story reflects on a member of the military and how life affects them and those around them.  You will also fall in love with New Oslo and its residents and businesses.  You will want to pack a bag and jump in your car and head there as fast as you can.