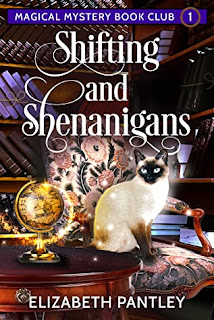 Paige and her adventurous Aunt Glo inherit a country inn from eccentric GeeGee. They pack up and hit the road, arriving at the charming place they both loved since childhood. Finally! They can get into the secret room in the basement that GeeGee kept locked! They discover it’s a wonderful library filled to the brim with mystery books. But more than the room was a secret – it’s a magical place that houses enchanted books. Paige and Glo find themselves smack-dab in the middle of a murder mystery, along with a motley group of book club friends. The club will need to work together to solve the case in order to get out of the book and back to their home.   (Summary via Goodreads)

I am at a loss of words....not because I don't know what to say about Shifting and Shenanigans by Elizabeth Pantley....it's just the opposite except if I say too much, it will give everything away !!!  I wish I could just say.....GO READ THE BOOK !!!  But alas....I cannot.

If you have read Pantley's Destiny Falls Mystery and Magic series you know that she is all about magical aspects in her writing so you won't be surprised when you read the first book in her new series, the Magical Mystery Book Club series .....

In Shifting and Shenanigans main characters Paige and her Aunt Glo inherited a country inn from Paige's great-grandmother, Glo's grandmother.  Even though it is a sad loss, GeeGee states in her will that she does not want them to have a pity party but to celebrate her life and enjoy their lives.  Seeing as Paige has just finalized her divorce and Aunt Glo is always up for anything, they sell some of their belongings and move themselves and what they kept to the Snapdragon Inn......little do they know what they are getting themselves into.

One place they were never allowed was the basement where the secret library is but now that they are owners, they venture to the basement to finally see the two story beautiful library with a talking cat named Frank.  Yes you read that correctly.  Upon meeting Frank and getting a tour of the secret library, he informs them that they are now the keepers of the library as well as hosts for the book club.  They are to gather 6 other people who are willing to participate in the book club. Luckily for them one of the people who answer their ad is Zelda who was a member of GeeGee's past book clubs so she can help them with getting started.

After they have found their 6 other participants, they gather in the secret library to pick the first book for them to read.  The library is shelved with all cozy mysteries and as they go around searching for a book to bring to the group to pick, they find that there are 8 copies of each book and they are tied together.  Once they all gather their choices, they are to read the blurb on the back and then decide.  Unfortunately the book that Paige picked doesn't have a blurb on the back so she starts to read the first page.....and before they know it the library is filled with smoke and they are somehow transported inside the book !!!  After the smoke clears and they go upstairs, they realize they are no longer in Cascade Valley....they are still in the inn however.  Luckily for them Zelda has done this many times with GeeGee so she is able to inform them as to what is going on.  Because Paige read from the inside of the book, it transported them to the town that the book is based in and in order to get out of the book and back home, the murder has to be solved.

So Page, Aunt Glo, Zelda, Frank and the other members of the book group decide to go around town getting to know the area as well as the people.....unfortunately they don't get very far when they find a neighbor naked and dead in a cage.  The group finds themselves actually enjoying their time in this little town and getting to know the people while trying to solve the murder.......but readers will never see what author Pantley has in store for the small innocent group !!!

While reading Shifting and Shenanigans readers will be able to overlook and accept quite a bit while reading....a talking cat, sure what not.  Secret magical library, sure okay.  Being transported inside a cozy mystery and having to solve a murder, sure okay why not.......but what follows in the story....well, I don't want to say anymore, you really need to read it for yourself.  Pantley has a crazy, fun imagination and the way she writes her stories is a special talent.  Readers will love reading this first book in her new series and I, for one, cannot wait to see where the book club goes next......