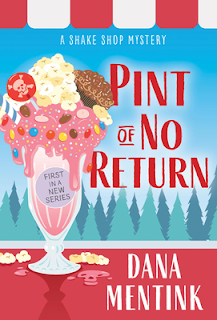 The first in new dessert cozy mystery series! A murder in town is bound to shake things up...After her divorce from her thrice-married embezzler husband, Trinidad Jones is finally ready for a fresh start. So when she's left one of ex's businesses in Upper Sprocket, Oregon, she decides to pack up her dog, cash in her settlement, and open her dream business: the Shimmy and Shake Shop, introducing the world to her monster milkshakes. And even with a couple sticky situations underway, namely that the other two ex-wives also call Sprocket home, Trinidad's life seems to be churning along smoothly.That is, until she discovers her neighbor, the Popcorn King, head down in his giant popcorn kettle. When one of Trinidad's fellow ex-wives is accused of the murder and Upper Sprocket descends into mayhem, it's going to take a supersized scoop of courage to flush out the killer.  (Summary via Goodreads)
Pint of No Return by Dana Mentink is the perfect debut for her new Ice Cream Shop Mystery series.  Mentink lays the story down so nicely and you cannot help but fall in love with the town of Upper Sprocket, Oregon, the people and the history of the main character is one you won't soon forget !!
Trinidad Jones moves to Upper Sprocket after her ex-husband goes to jail and she learns that he left her a building there.  Unfortunately not only did she learn that her husband was an embezzler but was also a cheater and he has two other ex-wives residing in the same town.  But seeing as she has nothing else to lose and wants a clean start, she packs up her belongings and her dog Noodles and moves to her ex-husband's hometown and starts to remodel the building he left her to open up the Shimmy and Shake Shop.
But while still in the remodeling stage she finds her business neighbor Kevin Heartly, the Popcorn King, dead in his shop.....and even worse the Chief of Police is the sister of her ex-husband and the main suspect is another ex-wife, Juliette, that Trinidad recently met and instantly liked.
Even though Trinidad has a lot on her plate to accomplish before opening up the Shimmy and Shake Shop for the Fourth of July weekend, she is pulled to trying to prove Juliette's innocence.  Even though they just met, she knows deep down that someone else killed Kevin.....but how to figure that out in a town she just moved to and she is still getting to know it and everyone in it ?  Luckily she meets brothers Quinn and Doug when she goes to their nut farm for an order and they become fast friends.  Quinn becomes a huge asset in Trinidad's life professionally and personally but all she can focus on is getting Juliette out of jail.
Trinidad slowly puts the pieces of the puzzle together and thinks she is one step in front of the real killer when something very destructive to her business happens nearly killing her and Noodles.....
Readers will fall in love with Pint of No Return and will want to continue returning to Upper Sprocket whenever they can.  There is so much to love in this series..... the quaint little town, the people in the town, Trinidad's fancy shakes that just reading the description will have you gaining weight, the little house that she lives in that you can clearly picture in your head, the growing relationships as Trinidad gets to know the people, even Noodles the dog is so unique you want to hug him !!  I did not want the book to end even though I wanted to know who killed Kevin.  I am so glad that Trinidad didn't give up, pack up and go live with her family in Miami.....oh and readers will LOVE Papa Luis and his swanky personality !!
Review by Missi M.
Posted by Cozy Mystery Book Reviews at 06:04