Beyond a Reasonable Donut (Deputy Donut Mystery #5) by Ginger Bolton 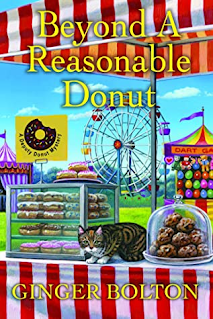 Selling her corn fritters at a carnival, Deputy Donut Café owner Emily Westhill faces off against a murderer who doesn’t play fair . . .Emily and her assistant, Nina, are looking forward to manning the Deputy Donut tent at the Faker’s Dozen Carnival in Fallingbrook, Wisconsin—a festival held on Friday the thirteenth to celebrate good and bad luck. But Emily has barely dropped the corn fritters in oil when bad luck boils up. First, their bucket of confectioner’s sugar disappears—and then while a mime creates a distraction, a magician robs their cash register.After the carnival, their misfortune continues. Emily discovers that someone has broken into artist Nina’s loft and vandalized a large painting in progress with the bucket of stolen sugar, which is now on the head of the mime, who seems to have been suffocated. Emily would bet Nina was the intended victim, but the cops think Nina silenced the mime. Now Emily must catch the killer white-handed—before someone else kicks the bucket ... (Summary via Goodreads)
Beyond A Reasonable Donut by Ginger Bolton is the fifth book in her Deputy Donut Mystery series and no matter if you've read the previous five or if your reading this book as your first in this series, you will not be lost or missing anything.
Beyond A Reasonable Donut has main character Emily Westhill and Nina, one of her employees, working at the Faker's Dozen Carnival.  This carnival showcases all the ways that a person can experience bad luck and little do they know that Nina is going to end up in a heaping pile of bad luck !!  While at the carnival running their Deputy Donut booth, a magician and a mime seem to work together to steal from the register.  Luckily Nina is able to shut the magician's hand in the cash register drawer but he does get away with some money.  Nina takes off chasing the magician and the mime but loses them.  Unfortunately she yells a threat at them and when the mime is found dead in her apartment later than night, Nina is the main suspect.  After the police learn some things that Nina has kept secret, they arrest her for the murder.
Everyone knows that Nina would never hurt anyone, let alone kill someone and Emily is determined to find the real murderer and get Nina out of jail.  Unfortunately for Emily there are a number of likely candidates on her list, however, it seems that everyone is keeping secrets.....
The Deputy Donut Mystery series is a fun packed series to read.  You have the Deputy Donut shop that Emily and her father-in-law own and run.  The shop is designed so that Emily can bring her cat, who the shop is named after, to work.  Emily and Tom have two valuable employees, Nina and Jocelyn.  Even though Emily's husband Alec is deceased she is still very close to her in-law's as well as Alec's partner, Brent and some of the other policemen and EMT's.  Emily's only flaw is that she gets herself in the middle of a police investigation...only because she knows the person arrested didn't commit the crime.
And in Beyond a Reasonable Donut besides the murder and Nina's being arrested, Emily is getting ready to celebrate two close friends, Samantha and Hooligan, getting married and everyone is hoping that Nina will be freed and out in time for the wedding.....but Emily has to figure out the real murderer first.....
Review by Missi M.
Posted by Cozy Mystery Book Reviews at 11:21