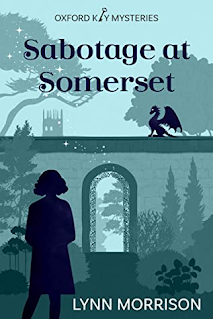 Nat has identified the evil menace stealing Oxford’s magic. Can she stop them before it is too late?

Natalie, Kate and Mathilde know who is wreaking havoc on Oxford’s magic. Now their challenge is to ensure they are brought to justice. When a film production comes to Oxford, it provides the group the chance to bait the perfect trap.

But the film set is plagued with problems from the moment it arrives. Equipment is damaged, scripts go missing and the lead actress is poisoned.

Nat and her friends will have to work fast if they want to salvage the production and trap the culprit.

There’s just one problem: Has the evil menace caught onto their plans or is someone else trying to sabotage the show?   (Summary via Goodreads)

Sabotage at Somerset is the fourth book in the Oxford Key Mystery series and by now, if you have read the previous books you are a fan and more importantly, you feel like you are a part of the group.  This series follows main character Natalie Payne as she begins her new job working in the colleges of Oxford as an event coordinator.  However her main focus and more important responsibility is to protect the magic that is within.  The magic and protecting it is a part of her being as her grandfather was also a prefect and worked at the college for years.  Along with 2 other prefects, Kate and Matilde, her pet wyvern, her boyfriend Edward and her friend Harry, they will face their greatest challenge in Sabotage at Somerset.

Nat's uncle Harold is coming to the colleges to film scenes for his historical period drama while Nat and her group are still working on resolving the problem with the magic to which they are getting closer to solving.  They now know the masterminds behind it, Oswald Beadle and Thomas Hobbes, one being a human and the other is an Eternal.  Nat with the help of her grandfather has summoned a lot of other Eternals within the colleges to help stand guard during the filming in case there is trouble.  Unfortunately Nat is drawn on a difference course when one of the members in the film is poisoned.

In this series Nat always has a full plate with her regular job creating memorable ceremonies, trying to save the magic, hanging with her friends and boyfriend but in Sabotage at Somerset she may just have more than she can handle.....

Sabotage in Somerset is my FAVORITE book in this series....so far !!!  With it being the fourth book in the series readers are pretty familiar with the storyline and the characters and setting.  You will have come to love and hate certain people and you will want to see things through to the end as Nat and company does as well.  There will come a point in this book where you will be powerless to stop reading, the "magic" will have taken over your body and a spell will be cast for you to keep reading until you get to the end and you will be thankful for that.  The last 20 or so pages of this book will grip your emotions and take them for a rollercoaster ride !!  You will laugh, cry and be fearful almost all at the same time !!!

The Oxford Key Mystery series is a must read and you should really add them to your to be read pile because before you know it Post Mortem at Padua will be here and you are definitely going to want to be caught up !!!