Farm to Trouble (Farm to Table Mysteries #1) by Amanda Flower 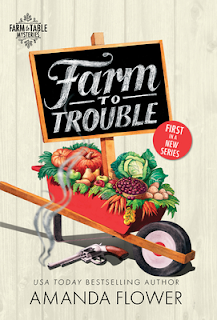 First in a new series!Shiloh Bellamy cashed in her big city job and 401K to return home to Michigan to save the family farm, but turning Bellamy Farms into a sustainable, organic operation is no small feat. Especially when her new investor is found dead at the farmers market not long after the contract is signed, a contract that the whole town knows her father was wholeheartedly against.Now, Shiloh must clear her family's name and track down the real killer before her farm dreams wilt before her very eyes. But with her father trying to stop any progress on his land, her cousin belittling her every effort, and the whole town believing her family at fault, Shiloh has to carry the investigation on her shoulders or risk all her dreams drying up before they begin.  (Summary via Goodreads)

Amanda Flower has another great start to a new series with Farm to Trouble, the first book in her Farm to Table Mystery series....and she ends it in such a way that readers will have to return to see what happens....but I'm getting ahead of myself.
In Farm to Trouble Shiloh Bellamy is returning to her hometown Cherry Glen Michigan to help her father on the farm.  Little does she know that the farm is in worse shape that her father let on and it is going to take a miracle to save it.  But Shiloh has taken the first step in obtaining an investor to help and can't wait to get started on turning the family farm into an organic farm with lots of possibilities.  Unfortunately Shiloh wasn't aware that the investor, Jefferson Crocker, and her father have a history and she soon learns that most of the town knows Crocker and it's not all good.  Before Shiloh can work things out she stumbles across a dead body at the famer's market and it is Crocker  !!!
Even though they is a long list of suspects the Chief of Police has his sights on Shiloh and her father.  Shiloh decides she needs to look into Crocker and his hold on the town and learn everything she can so that she can figure out who the real killer is before one of them gets arrested !!
Shiloh has a lot on her plate returning home.  She is adjusting to leaving the big city of LA and her busy job as a television producer to work the farm in the country.  She also left home shortly after losing her fiance Logan and her grandmother and there are people in town that think it was her fault that Logan died and won't be welcoming her with open arms.  When she sees how rundown the family farm is and how much work it is going to need and with the investor murdered and she didn't finalize the contract, she begins to question if coming home was the right thing to do. Before she can work everything out she needs to learn more about who killed Jefferson Crocker and take the heat off of her father and herself.
It always amazes me when I read a book and I wonder how authors can come up with the stories they write but Flower makes it look so effortless.  The words make the story come to life in the readers mind and you feel like you are right there along side Shiloh as she reconnects with her friends, family and hometown.  Readers will wish they could jump inside the book and be there in person. And the way Flower ends the story, leaving something unresolved, will guarantee that readers will be waiting "patiently" for the second book in this series and hopefully an answer ......
Review by Missi M.
Posted by Cozy Mystery Book Reviews at 11:25