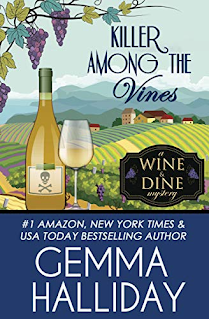 From #1 Amazon & New York Times bestselling author Gemma Halliday comes a killer new culinary mystery novel in the USA Today bestselling Wine & Dine Mysteries!Emmy Oak's family run winery has been in the headlines one too many times and for all the wrong reasons. Which is why she's decided to hire a night security guard, Bill Buckley, to keep an eye on the place. Only when Buckley calls her in a panic about a tripped alarm, Emmy again fears trouble at Oak Valley Vineyards. A fear that is realized in the worst way when Emmy rushes home to find her security guard dead among the blooming grape vines.Was it poachers? Trespassers? An interrupted would-be burglar? Or was the attack less random and much more personal...Emmy's sorta-maybe boyfriend Detective Christopher Grant worries the killer might have been after her. But as Emmy learns more about her late employee, she realizes Buckley had far more enemies than she. Before becoming a security guard, Buckley was a police officer...who was caught taking bribes to look the other way. A scandal that illuminates a whole host of suspects, including an angry ex-wife, a former partner with a grudge, and a convicted madame turned cookie purveyor with revenge on the mind. Not to mention the surly teenage son of Buckley's live-in girlfriend, who would do anything to get rid of his almost-stepdad. But when Emmy finds out Detective Grant also has his own connection to the dead man, she suddenly wonders what else Grant may be hiding about his past. Can Emmy ferret out the killer among the vines... before they come looking for another victim?**Simple and delicious recipes and affordable wine pairings included!**"Ms. Halliday is the undisputed queen of the genre."~ Fresh Fiction"I rank A Sip Before Dying as one of my favorite fun reads. I say to Gemma Halliday, well done!"~ The Book Breeze"The Wine & Dine Mystery series is a definite to read and keep an eye out for more to follow."~ Cozy Mystery Book ReviewWine & Dine Mysteries:A Sip Before Dying – book #1Chocolate Covered Death – book #2Victim in the Vineyard – book #3Marriage, Merlot & Murder – book #4Death in Wine Country – book #5Fashion, Rosé & Foul Play – book #6Killer Among the Vines – book #7Rating: This story does not contain any graphic violence, language, or sexual encounters. Its rating would be similar to PG-13 or what you would find on a Hallmark Channel movie or TV series.  (Summary via Amazon)

I am a huge fan of the Wine & Dine Mystery series by Gemma Halliday and who wouldn't be .... there is so much to love about this series....from the people, to the storyline, to the relationships and friendships, to the setting, and, of course, the murders !!

Killer Among the Vines is the seventh book in the Wine & Dine Mystery series and main character Emmy Oak has a lot on her plate.  She is always struggling to keep her family vineyard up and running but it looks like her hard efforts may be losing the battle.  She needs a miracle to happen to save the vineyard and her small group of employees that she sees as family.  The last thing she needs is a murder on the property....but that is exactly what she gets when her newly hired security guard Bill Buckley goes out on the grounds to check out what triggered the alarm system.  Unfortunately by the time Emmy gets there, she finds Buckley shot to death.

And if you are a fan of this series like me, you already know that Emmy will see this as personal and go looking for the killer even though her boyfriend, Detective Christopher Grant, is beyond capable of finding the bad guys and continually tells her that fact.  However when her and her best friend Ava start looking into the murder, they find a long list of possible suspects and a lot of secrets and lies to work through.....but when Grant's name in thrown into the mix, Emmy will have some hard questions to ask ....

Readers will fall in love with everything about this series.  The characters are easy to relate to people, people you would love to hang out with, the series is set mainly in the family vineyard and who wouldn't want to hang out there ?  The friendships and the relationships are ones readers will wish they had ..... who wouldn't want David Allen as a friend ??  And one a last note.... readers get to know Emmy's mother more in this book and it looks like we are going to see more of her and her life in the next book.....if the ending of this book is an indication.

I highly recommend grabbing your copies and getting lost in the story.....grab a snack and glass of wine and let Halliday take you away......just like Calgon......