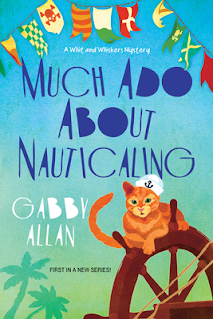 Whitney Dagner is your tour guide to a Pacific paradise that's to die for--only to find it's a place people are also willing to kill for--in Gabby Allan's Much Ado About Nauticaling, first in the "Whit and Whiskers Mystery" series. After far too many years in the Los Angeles corporate world, Whitney Dagner has come home to Santa Catalina Island off the California coast to help her brother Nick run Nautically Yours, the family tourism business. Between gift shop shifts selling all manner of T-shirts and tchotchkes and keeping her feline Whiskers in fine fettle, she pilots the Sea Bounder, a glass bottom boat showing tourists the underwater sights of aquatic plants, marine life--and a murder victim?The self-proclaimed Master of the Island, Jules Tisdale was a wealthy man with business interests throughout Catalina who was about to be honored as Person of the Year before someone strangled him with his own tie and tossed his body into the water. That someone appears to be Nick, who had a raw deal from Jules and no alibi the night of his murder. To clear her brother's name, Whit will have to investigate Jules' shady associates and not exactly grief-stricken family members--with the unwelcome help of Felix Ramirez, police diver and Whit's ex-boyfriend who's looking to rekindle their relationship.  (Summary via Goodreads)
There is NO way that you won't fall in LOVE with Much Ado about Nauticaling by Gabby Allan.  There is so much to love that you will not want the story to end !!
Much Ado about Nauticaling is the first book in the Whit and Whiskers Mystery series and the stage is set beautifully.  And with the "stage" being an island, how can you not want to stay there forever ?
In Much Ado about Nauticaling we are introduced to Whitney "Whit" Dagner and her cat Whiskers who just moved from Los Angeles and a busy office job back to her hometown Santa Catalina island to help her brother Nick with the family business as well as open up a gift shop.  Whit and Nick's grandparents, Pops and Goldy, have handed down the family business, Nautically Yours, so that they can retire and enjoy island time.  Nautically Yours is a glass bottomed boat touring business where they take tourists out to explore the underwater world through the bottom of the boat.  Unfortunately they did not know that after giving a tour to a group of towns people celebrating the Person of the Year they would be trying to prove Nick's innocence from killing the Person of the Year !!
Jules Tisdale, the Person of the Year, was suppose to leave the tour boat and head to a dinner celebrating his new title but it doesn't look like he made it when shortly after Whit and Nick see him under the boat..... dead  !!  And if that isn't enough of a shock, the police have Nick as their one and only suspect !!  So while Nick is in hiding, Whit takes it upon herself to compile a list of more likely suspects.  She enlists the help of her best friend and roommate, Maribel and her ex-boyfriend Felix who just moved to the island to be closer to Whit. (There is way more to that story but Whit won't entertain that while she works on helping her brother) Unfortunately Maribel works at the front desk at the police department and Felix is a part time diver for them so they are limited in what they can do, say and keep secret from their jobs.
Readers will love riding along with Whit in her golf cart as she travels around the island talking to whoever she can to help clear Nick's name.  Luckily no one thinks that he killed Jules but no one knows who did it.  And as she talks to more and more people, her lists of people who could have done it grows without any evidence to support it......
Readers will get lost in this story immediately !!  Come on....it's an island where the main means of transportation is a golf cart !!  And the characters are definitely people you will want to hang around with as much as possible.....even if you are helping solve a murder.  And Whit's family business and opening up a gift shop are jobs you can't even really labels "jobs" because you know they are a blast to do !!  And the people...come on again !!  She calls her grandparents Pops and Goldy and they are an absolute HOOT !!  And it sounds like Felix is a keeper if only Whit can give him a chance to talk and allow them to explore their feelings.....oh well, there is always the second book to do all that....which if the way this book ended is any indication of that, we are in for another ride of our lives....but that's okay, the golf cart can only go 15 miles per hour so we can still enjoy the scenery !!!
Review by Missi M.
Posted by Cozy Mystery Book Reviews at 12:35