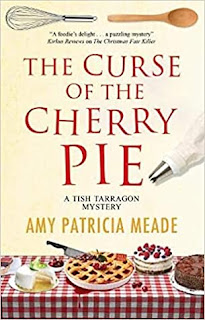 A sharp and tangy culinary mystery featuring Tish Tarragon. Can Tish beat the curse of the cherry pie to win first prize at the Virginia Commonwealth Bake-Off?When literary caterer Letitia 'Tish' Tarragon's friend and star baker at Cookin' the Books cafe, Celestine Rufus, pulls out of the prestigious Virginia Commonwealth Bake-Off, an anxious Tish reluctantly takes her place. Will her signature bake, a frangipane cherry pie, be up to the grade?As the bake-off gets underway, Tish's worries increase when she learns that two contestants from the previous two competitions also had cherry pies on their menus . . . and both women died suddenly before making their bakes.Amid bitter rivalries, simmering jealousy and the bakers' insatiable appetite for winning, is the curse of the cherry pie about to strike again?  (Summary via Goodreads)

The Curse of the Cherry Pie, the fourth book in the Tish Tarragon Mystery series by Amy Patricia Meade will have you focused on nothing else while you read it.

The Curse of the Cherry Pie starts with main character Tish Tarragon and her friends attending the funeral of Lloyd Rufus.  Lloyd was the husband of Tish's employee and friend Celestine.  Then after the funeral while they were attending the luncheon for the family at Tish's cafe, Cookin'the Books, they meet the new Sheriff who no one likes, most of Tish.

As in previous books in this series, there is a lot going on.  Tish recently moved in with her boyfriend, Schuyler, who is a lawyer but recently decided to enter politics and run for Mayor, the previous Sheriff, Clemson Reade, left Hobson Glen at Christmas without saying goodbye to Tish.  Tish has decided to enter the Virginia Commonwealth Bake-Off in Celestine's place as she is dealing with her loss and grief.  Little did anyone know how cut-throat the competition would be !!

After Tish hands in the dishes she will be making during the competition, she finds out there is a Cherry Pie Curse !!  There were two previous contestants that were scheduled to bake cherry pies for the event and both died before they could complete the bake-off.  Once contestants hear that Tish is scheduled to make a cherry pie, they try to talk her out of it.  But she is not one to back down so she doesn't change her mind or her list of dishes.

Unfortunately Tish suffers a baking accident and receives threatening notes from a mystery person obviously trying to get her to quit.  And the new sheriff is not one to confide in or expect help from so it's just Tish, her two best friends, Mary Jo and Julian, as well as a deputy who is assigned to be on hand at the convention center.  Schuyler is too busy with work at the law firm as well as his campaign for Mayor.  Also Schuyler is one of the people trying to convince Tish to quit the bake-off as well as change other things about herself....like stop looking into the previous murders as well as the threats on her life, work less at the cafe, and stand next to him while he is campaigning.

Readers will be instantly sucked into this book and not want to stop reading.  You are going to neglect chores, people, sleep and whatever else whiile you hang out with Tish and crew.  The Curse of the Cherry Pie is a crazy rollercoaster ride with stomach dropping moments as well as twists and turns that you will not see coming .... but it will all be good when you get to the end and see where Meade ends the story leaving the reader wanting to dive into the next book, From Ladle to Grave as soon as you can !!!