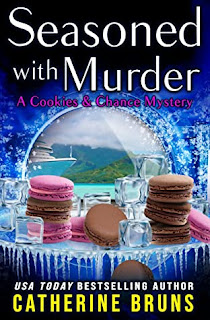 Full time baker and sometime sleuth Sally Muccio is excited to be traveling on her first cruise along with family and friends. Sal and coworker Josie have been hired to cater desserts for the mortuary event onboard that her father is headlining and are also looking forward to some fun and relaxation in the sun.But the ship's itinerary doesn't go as planned when the body of Southern belle and galley director Sarah Leigh Walker is discovered in the freezer. To make matters worse, Sal's nemesis, the elderly and cranky Nicoletta Gavelli, is accused of the ice-cold crime after a very public and ugly argument with the victim.Despite Nicoletta's sharp tongue, Sal knows the woman isn't guilty and would never refuse to help her. With the real killer still cruising the decks, Sal and Josie must work fast to track them down before Nicoletta's last hope sinks faster than the Titanic.Recipes included!   (Summary via Goodreads)

Every time I open up a book in the Cookies & Chance Mystery series by Catherine Bruns I feel like I am visiting family and in the twelfth book, Seasoned with Murder, we are going on a cruise !!!  How can anything bad happen when you are in the middle of the sea on a ship where the only people you know are the family you are with.  Well..... Catherine can find a way and main character Sally Donovan and her co-worker Josie will find themselves right in the middle of all the chaos !!!

In Seasoned with Murder Sally's father has gotten the entire family tickets for an entire week on the Seas the Moment cruise ship.  Everyone in the family is going .... Sally, her husband and their infant daughter, Cookie, Sally's parents, her grandmother, Sally's sister Gianna, her husband Johnny, their infant son Alex as well as Sally's partner Josie and her husband Rob.  And because she cannot be left out Gramma Rosa's best friend and neighbor as well as Johnny's grandmother, Mrs. Gavelli and her boyfriend Ronald are going but paying their own way.  Sally's father happened to get free tickets for the family because he is there to do a presentation for his funeral business and promote the book he wrote.  The only thing he didn't tell Sally and Josie was that he worked it out so that they would be doing all the baking for the mortician exposition and the only thing he didn't tell the entire family is that they would be on the first senior citizen cruise for the company.

Unfortunately on the first morning they go to the kitchen to start working on the desserts they find Sarah Leigh, the executive director and their "boss", frozen in the walk in freezer.  And when security on the boat search Sarah Leigh's room, they find Mrs. Gavelli's shawl with pills in the hidden pocket.  Security take Mrs. Gavelli into custody immediately and rule the murder solved and case closed.  But Sally and Josie know that even though Mrs. Gavelli and Sarah Leigh had a run in, there is no way Mrs. Gavelli would have killed her and where would she have gotten the poison in the middle of the ocean ?  Luckily for them Gianna is a lawyer and she is on the case in the legal form and Sally and Josie decide to look into the murder in the way they know best.....

As Sally and Josie start looking into Sarah Leigh's life they find that there are quite a few people that disliked her and might have wanted to see her dead ... and some of them are on the ship.  Luckily for them Sarah Leigh's cousin Sherry also works on the ship so they are able to get some information from her.  And the more they dig, the deeper they get into Sarah Leigh's life and the list of suspects gets longer and longer.  And they have a limited amount of time to find the real killer because the ship has been turned around and is heading back to Florida and when it does Mrs. Gavelli will be formally arrested and taken into custody !!

Readers cannot get enough of this series !!  You cannot help but fall in love with the people, the storyline and everything else !!!  There is so much more that I could tell you to convince you but I'm sure you have enough intel and have come to the same conclusion that I did.....you NEED the Cookies & Chance Mystery series in your life and you want to be a part of this crazy family !!  I cannot say enough good things about Bruns and her writing !!  The best thing that I can tell you is to RUN, not walk, to the nearest bookstore, your computer or wherever you get your books and get ALL of the books in this series, if you haven't already and lock yourself in a room with snacks and beverages and RUN AWAY WITH SALLY & JOSIE AND CREW !!!!  It will be the best thing you've done in a while !!