Murder with All the Trimmings (Josie Marcus, Mystery Shopper #4) by Elaine Viets 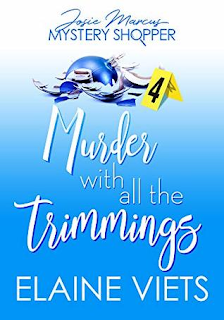 ‘Tis the season for sleuthing when secret shopper Josie Marcus’s ex falls victim to a festive fiend…Josie’s latest mystery shopper report won’t help business at Naughty or Nice, Maplewood’s raunchy year-round Christmas store. But she can’t worry about work when her ex-dealer, ex-convict, ex-boyfriend, Nate Weekler, just came home for the holidays, prepared to fight Josie for custody of their daughter. Josie wishes he’d catch the next sleigh out of town, but instead, Nate is poisoned…and suddenly Josie is a person of interest.With Nate’s criminal past, he’d never make Santa’s “Nice” column, but his own list of enemies also includes plenty of “Naughties” who might want him dead. Josie will need her team of little helpers to wrap up this case, before the killer commits another holiday homicide.  (Summary via Goodreads)

I am a huge fan of author Elaine Viets and her Josie Marcus, Mystery Shopper Mystery series.  Every time I read one of the books in this series it becomes my favorite one so far and Murder with All the Trimmings, the fourth book in the series, is now my favorite....that is until I read the fifth book.

In Murder with All the Trimmings Josie is thrown into her worst nightmare.....the father of her 9 year-old daughter Amelia comes to town ! Josie and Nate never married and when he was arrested for being a drug dealer, she did not let him know that she was pregnant.  She didn't think that he would ever get out of the Canadian jail he was in and even told Amelia that her father was dead.  But when he shows up and wants to get back together with Josie and be a family with her and Amelia, Josie is not happy.  Josie has finally found the man of her dreams in Mike the plumber and wants nothing to do with Nate.  Unfortunately Josie's world comes crumbling down on her when Nate dies.....but let's back up just a bit.

Mike's ex-girlfriend who is the mother of his teenage daughter opens up a Christmas store right next to two other Christmas themed stores except her store, Naughty or Nice, is not your normal Christmas store.  Doreen is a thorn in Josie's side and her daughter Heather is a thorn in Amelia's side.  Heather is not a nice person at all and unfortunately she takes after her mother and sadly Mike does not see it at all.  When it comes to his daughter, she can do no wrong.

When two people die, Nate being one of them, and they are ruled murder and their deaths are from poisoning and the only thing they have in common is that they both ate chocolate cake from the store next door to Doreen's, Elsie's Elf House, Josie is thrown into a murder investigation....again.  And this time not only is she a suspect but Mike is also.  Josie has to figure out how to prove that neither her or Mike poisoned Nate and some woman that they didn't even know and do it fast !!

Readers cannot help but fall in love with this series and no matter what book you pick up, you will be instantly drawn into Josie's life and not want to leave.  Viets has a great cast of characters for readers to love and the stories and the murders that she comes up with will grab your interest immediately.  And as you get to know everyone, even the nosy neighbor Mrs. Mueller, you will be ready to move into the neighborhood and help Josie navigate through life.....