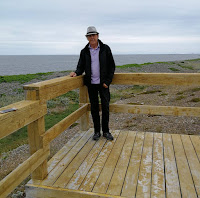 Mike Martin was born in St. John’s, NL on the east coast of Canada and now lives and works in Ottawa, Ontario. He is a long-time freelance writer and his articles and essays have appeared in newspapers, magazines and online across Canada as well as in the United States and New Zealand.

He is the author of the award-winning Sgt. Windflower Mystery series set in beautiful Grand Bank. There are now 11 books in this light mystery series with the publication of Buried Secrets. A Tangled Web was shortlisted in 2017 for the best light mystery of the year, and Darkest Before the Dawn won the 2019 Bony Blithe Light Mystery Award. Mike has also published Christmas in Newfoundland: Memories and Mysteries, a Sgt. Windflower Book of Christmas past and present.

Mike is Past Chair of the Board of Crime Writers of Canada, a national organization promoting Canadian crime and mystery writers and a member of the Newfoundland Writing Guild and Ottawa Independent Writers.

Here is a list of the books in the Sgt, Windflower Mystery series...

The Walker on the Cape

The Body on the T 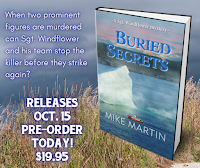 A Twist of Fortune

A Long Ways From Home

Darkest Before the Dawn

Christmas in Newfoundland : Memories and Mysteries

I had the pleasure of interviewing Mike, via email sadly and not in person, and got to know him a little more.  Here is what we talked about.....

I have always been a reader and that led me to want to write. I just had no idea how to do it. Especially fiction. So, I spent many years writing stories and poems that I never shared and found work in all kinds of jobs that required writing skills. Over time I became a little braver and started submitting my articles to magazines and newspapers. That gave me confidence and led me to eventually writing my first fiction book. Of course, it was a Sgt. Windflower Mystery. The Walker on the Cape.

I love and admire great writing. It almost doesn’t matter the subject matter, although my tastes have changed over the years. But I still love Agatha Christie and Charles Dickens and JRR Tolkien. They all created stories and worlds that were completely make believe, but absolutely believable.

3.  How did you come up with Sgt. Windflower's character ?

Sgt. Windflower came to me out of the fog one night in Grand Bank and started telling me his story. I started writing it down and the stories grew from there. People ask me why I made him a certain way. The truth is that he came exactly as he is. A Cree from Northern Alberta who’s a Mountie, a member of the Royal Canadian Mounted Police.

4.  Do you have law enforcement in your family ?

No. That meant I had to do a lot of research on police procedures and how the life of a police officer actually worked. I did have a lot of help from current and former law enforcement officers who gave me advice and suggestions along the way.

5.  Sgt. Windflower is unique in his "rituals" like smudging, is that a part of your life as well ?

Sgt. Windflower’s rituals are common to his Indigenous roots and community. To smudge is a fairly common activity amongst many people in that world. I do not smudge but I learned how to do it from an Indigenous healer who helped me deal with an issue in my life.

6.  Is the weather in Canada really as bad as you portray it is in the series ?

The weather in Newfoundland is pretty much as pictured in the series. It’s on the coast so there’s always some form of moisture and an ever-present wind. That doesn’t mean there aren’t some absolutely gorgeous days from time to time, particularly in the summer months. There’s just not that many of them.

7.  When you are working on a new book do you write everyday ?  What is your schedule like ?

When I’m writing a book I write every day. I have a word count. Usually 1200-1500 words a day. I start early in the morning and get a chunk done. Then I take a break and do some more. If I have to, I go back later to meet my quota. When I’m writing I live in that world. That makes living in the real world a bit of a challenge. But I have a supporting partner who basically leaves me alone to finish my writing.

8.  Does your family or friends read your books ?

My family has always been great supporters of my writing. I would drag all of them out to any event or book signing and get them to recommend my books to their friends. My friends are all supportive as well and if they’re not, they’re not my friends. Just kidding. One of the best things about the Sgt Windflower series has been the friends I’ve met along the way. Fellow writers, beta readers and many people who love the books have also become my friends.

9.  If you could tell your younger self anything, what would you say ?

Trust yourself and follow your dreams. Anything is possible if you are willing to work for it.

10.  What advice do you have for younger writers who are just starting out ?

Keep writing. Every day if you can to hone your craft. And read. Writers who you admire and want to emulate. We cannot be good, solid writers without reading a lot.

11.  How far do you see the Sgt Windflower series going ?

It’s already gone quite far. Buried Secrets is Book 11 in the series. That’s 10 more books than I ever imagined. They are now available in print and ebook formats and 4 are available as audiobooks with a fifth A Long Ways from Home coming this winter. And the series is being translated into Spanish and German. So I guess I see it going all over the world.

I am not a plotter. I do not outline and I have no idea how the story will end once I start writing. I think that’s more fun. I follow the story as it is told to me by Windflower and the other characters and I have to wait until the end to see who dun it. I think that is a much more exciting way to write and it keep me motivated right up until the end.