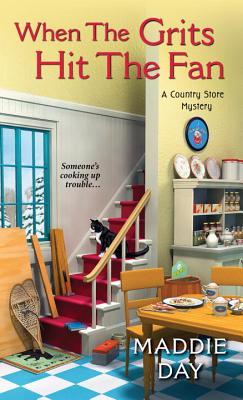 Despite the bitter winter in South Lick, Indiana, business is still hot at Robbie Jordan’s restaurant. But when another murder rattles the small town, can Robbie defrost the motives of a cold-blooded killer?Before she started hosting dinners for Indiana University’s Sociology Department at Pans ‘N Pancakes, Robbie never imagined scholarly meetings could be so hostile. It’s all due to Professor Charles Stilton, who seems to thrive on heated exchanges with his peers and underlings, and tensions flare one night after he disrespects Robbie’s friend, graduate student Lou. So when Robbie and Lou go snowshoeing the next morning and find the contentious academic frozen under ice, police suspect Lou might have killed him after their public tiff. To prove her friend’s innocence, Robbie is absorbing local gossip about Professor Stilton’s past and developing her own thesis on the homicide—even if that means stirring up terrible danger for herself along the way . . .  (Summary via Goodreads)


Oh how I LOVE hanging out with Robbie at Pans 'N Pancakes....even if there is a killer running loose around town.  Robbie always has her hands full with the restaurant especially when a death occurs in town and she is the one that found the body !!!

Robbie and her friend Lou go snowshoeing around the lake and while crossing over the lake, Robbie happens to look into an iced over ice fishing hole and sees the face of Professor Stilton.  He was just in the restaurant the night before with a group from the Sociology Department from the nearby university.  Now its no secret that he wasn't well liked but to push him into a cold lake ??

Of course being the puzzle solver that she is, Robbie cannot help but show interest in the case...especially when some of the "suspects" are people she knows.  And telling the detective in charge of the case that they are innocent doesn't go over too well for her.

As well as being a puzzle solver, Robbie is great with multi-tasking.  While she preps for the morning rush or tears down walls upstairs of the restaurant, she allows her brain to wonder and ponder.....  But while working on the upstairs she comes across some items that were hidden in the walls as well as a secret tunnel that leads to the barn.  She talks to Jo, the previous owner of the building who actually lived upstairs about the items.  Jo does confirm that she put the items in the walls many years ago.  Now Jo is also the mother-in-law of Professor Stilton whiich means her daughter also lived upstairs of the restaurant when she was a teenager.

When Robbie comes across a built in cabinet with a doll and a diary, everything comes together.  All she has to do is get the evidence to the police before her and Abe become 2 more victims.

I just LOVE how Maddie Day writes the Country Store Mystery series.  There are times while you are reading that everything is going nice and smooth but turn the page and as quick as that things take a drastic turn and you are on the edge of your seat holding your breath !!!  And did I mention how AWESOME Robbie is ??  This girl has got it together....even when she doesn't think so !!

When the Grits Hit the Fan is the 3rd book in this delicious series.  What are you waiting for ?  If you haven't dropped into South Lick for a visit, better hurry up...... you don't want to be left behind !!!