Book Review: Night of the Living Thread by Janet Bolin 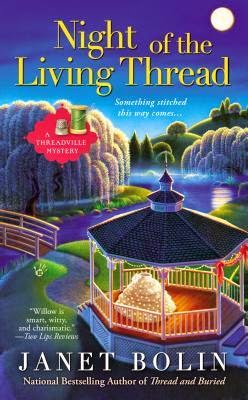 It's almost Halloween in Threadville and life certainly is busy. Willow and her friends are busy preparing for Edna's wedding to the local doctor, Gord, and Ben is preparing to host the Zombie Retreat at the Elderberry Bay Lodge. With an anxious mother-of-the-bride in town and zombies running rampant, it is going to be anything but quiet for Willow at her store, In Stitches. However life becomes a whole lot more complicated when her mother foists an unwanted house guest on her and one of the wedding guests is discovered dead in the lake. In between wedding preparations and avoiding zombie attacks, Willow and her friends set about trying to solve the murder.

I love visiting Threadville. Of all the fictional cozy towns it is one of my absolute favourites. All those embroidery, yarn and fabric stores just makes the inner crafter in me drool and want to visit there! In Night of the Living Thread, one of our favourite crafters, Edna, is getting married and the other women of Threadville have a great surprise for her... an amazing wedding over skirt that is made up of every kind of embroidery possible!! It definitely is a vision and one that Edna is bound to love!

To say that Janet Bolin is a masterful storyteller is an understatement. In each of the previous books I've enjoyed how she blends elements of embroidery and needlecraft with the mystery, giving even the most seasoned crafter, more information about the crafts they love. And the mystery? What a mystery it was with a town full of zombies running rampant and a couple of new characters that you will just love to hate!!

In Night of the Living Thread we are introduced to a few new characters, many of whom probably won't be making a comeback. However, I hope Edna's mother, Mrs Battersby, isn't one of them. She first appears as a grumpy, nit-picky mother, but there is more to her than meets the eye. She totally won me over and I hope she makes a second appearance in later novels because I think she could bring a lot of Threadville.

If you haven't started the Threadville Mysteries yet I recommend running to your bookstore or online bookseller straight away to pick up this series. It's alive with charming characters and unputdownable mysteries and it is one series that you are going to be adding to your favourites!
Posted by Anna at 10:22